The late-season openings at Ontario’s Stratford Festival showcase a dedication to promote new works, experiment with established classics and unearth neglected masterpieces from our time.

Among the news works this season, none is more exciting than Erin Shields’ stage adaptation of John Milton’s “Paradise Lost.” Milton’s 1667 epic poem masterfully tells the story of humanity’s fall from God’s grace as the Devil temps Eve in Paradise. Creating a script that runs just under two and half hours from twelve books of poetry that run between 600 and 1000 lines each is no small challenge.

One major change Shields and director Jackie Maxwell made is representing the Devil as a woman. Milton’s original text has only two women as characters and only Eve has a major part. But, thanks to Lucy Peacock’s sizzling performance, this manager of the Underworld has never been more fun to watch at work. Her opposition, God the Father, is represented with equal charisma by Juan Chioran, who constantly reassures us that he is looking out for mankind’s better side.

Shields’ splendidly lyrical prose and Jackie Maxwell’s sharp direction may have created a twenty-first-century classic adaptation from a seventeenth classic. This production is in the Studio Theatre with less seating than Stratford’s larger venues and the intimate environment works very well, but seating is more limited, so book and check ahead, as the show runs through October 21, to once again experience humanity’s fall.

Shakespeare’s tragedy of “Julius Caesar” has since 1600 been a stage standard and classroom regular reading assignment. So, what is next? Director Scott Wentworth answers that with remarkably unconventional casting and a historical homage to the Elizabethan era. 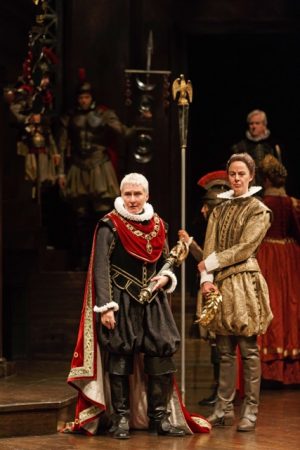 Designer Christina Poddubuik and director Wentworth have clothed the principles in Elizabethan era dress, a tribute to the era of the play’s composition and first performances. Descriptions and one surviving annotated design from Shakespeare’s era (from a production of “Titus Andronicus”) indicate that performers of the Bard’s era performed in largely contemporary costumes. This gives a modern audience a subtle, visual historical lesson.

Casting women in the roles of Julius Caesar (Seana McKenna), Mark Antony (Michelle Giroux), Cassius (Irene Poole) and Octavius Caesar (Sophia Walker) definitely make the audience work a bit at focusing on how true to the text these performances resonate. These talented actresses give strong performances, but don’t always ring true. The sum of these spirited performances is often interesting, occasionally fascinating and sometimes off the mark.

The contrast with such masculine roles as Brutus, played superbly by Jonathan Goad, and cast traditionally, is often jarring. Maybe an all-female cast would ring truer in the realm of experimentation?  Scott Wentworth’s “Julius Caesar” is by no means a dull production and his efforts at injecting some new life into this warhorse are admirable. But with such contrasts in gender demeanor distracting from the text, one wonders if this is the way to inject life?  Stratford’s “Julius Caesar” will run until October 27.

Eduardo De Filippo (1900-1984) may be the finest playwright few have heard of. But, fortunately, Stratford Artistic Director, Antony Cimolino has, and he knows how to direct this wonderful, but little known Italian playwright. During his long life, De Filippo would contribute to his home country and the arts as an actor, translator, director-playwright, screenwriter, poet and politician.

Director Cimolino’s unearthing of “Napoli milionaria!,” a 1945 comedic drama set during World War II, is a major contribution to bringing the best European writing to the English speaking world. This translation by John Murrell, one of Canada’s leading playwrights, is a smooth and literate translation that brings out these rich characters. Set in Naples during the shortages of the Second World War, this family drama runs the gamut from moments of pleasant comedy to serious discussions of life under stress. 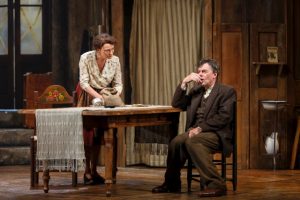 There is so much to praise in director Cimolino’s ensemble it is hard to single out an outstanding performance, but I will try. Over the years, my admiration for the acting brilliance of Tom McCamus has grown. Yet, here in “Napoli Milionaria!,” he has really hit his mark in what could be a career-defining stage characterization of the highest order.

By the way, the title is generally translated, “The Millions of Naples”, yet the 1950 film version which De Filippo wrote, directed and appeared in was released under the title “Side Street Story.”  This wonderful theatrical treasure continues until October 27.

Check out their website, stratfordfestival.ca. for fall schedules and discounted performances. Some productions run into the first week of November. You can also call to the Stratford box office toll-free at—1-800-567-1600. Remember visitors to Canada are required to have passports.