Baby Daddy premiered Wednesday, June 20 at 7:30 PM on ABC Family, which startlingly has started going the Bravo route by showing such shows like Bunheads and Baby Daddy and something I think is called Hollywood Nannies that all definitely do not jive with their daytime shows of Step by Step and Full House.

In-a-nutshell synopsis: cool, laidback twenty-something slacker Ben seems to have the perfect life – his brother is a hockey player who has been traded onto a team close to home, which means, those two bros are living together with Ben’s best friend Tucker, and he has a job as a bartender and he has no problem with the ladies. Despite the slight tension he has with his mom, who blithely regards him as someone who’s not doing the most with his potential, he’s just bumming along. Until the day little Emma gets dropped off at his apartment, the only remaining vestige of a not-so-fantastic relationship, and Ben begins to question the lack of responsibility and anything serious in his life. 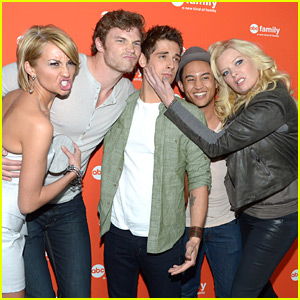 Starring: Jean-Luc Bilodeau (aka the dorky younger brother of Matt Dallas in the fantastic Kyle XY, which was tragically and unfairly shut down by ABC Family, who suddenly blossomed into a very attractive pretty boy), Taj Mowry (aka SMART GUY oh em gee I’m so excited to have him back on live TV, no offense to the tongue in cheek rendition he gave to Kim Possible’s resident tech geek Wade), Chelsea Kane (also known as the girl who made googly eyes at Joe Jonas in that horrible, horrible unintentionally slapstick show JONAS), Derek Theler (model turned actor who actually has an entertaining twitter and is apparently a giant Marvel comics fan), and Melissa Peterman (who I will always regard as Barbara Jean).

First impressions: kinda rough for a first episode, but that was to be expected, with such a premise and to a summer audience. There was the obligatory hero-must-prove-himself-to-be-worthy montage, as well as the predictable love triangle that sprouted out of nowhere. However, given the cast, specifically for the outrageously appealing JLB, and the small glimpses of quality acting and storyline, I’m calling myself a wary fan, and will be tuning in next week to see if the second episode will satisfy my high expectations. Also, my expectations are ridiculously high for the show, given my ability to latch onto shows that have a predilection for being canceled after only one season, mostly because JLB is back on television and because of the casts’ impressive aggressive twitter attack that mostly consisted of them professing their love for the show and for each other; so there’s that.

Now, onto the specifics:
Jean-Luc Bilodeau (hereto be addressed as JLB) is Ben, who is basically a grown-up puppy who has no idea of the definition of “responsibility.” He is a bartender at a bar that apparently uses “hipster” as a dress code, skinny tie and untucked button-up etc, and seems to channel Tom Cruise circa Cocktail when mixing drinks and wowing the ladies. He’s way too confident and his character is just begging to be taken down a notch, hence the convenient appearance of Emma.

By the way – Emma? Really? Yes, Emma is a pretty name, and the idea for this show was probably thought of way before “Once Upon a Time,” but I couldn’t help but roll my eyes at the mention of a baby given up by her parents and thrust upon an unsuspecting boy to be used as a measure of his character, oh so coincidentally named “Emma.”

Moving on – man, Ben’s entourage is insanely good looking. His brother, Danny, played by Derek Theler, is about seven feet tall, and manages to channel All-American good guy right alongside I-can-crush-your-bones-in-an-instant-should-you-upset-me. He has a nice dash of dorkiness to balance out the perfection that is his face, and please tell me I wasn’t the only one to facepalm when his repressed crush on Riley was revealed. Chelsea Kane takes on the role of Riley, former high school fatty with the unfortunate nickname “Riley Fat Pants” who has now shed all that weight, has gotten into law school, and apparently gotten a pretty snazzy fashion sense. She’s gorgeous and funny, still manages to scare the crap out of Danny and Tucker with a single glare or a nasty pinch, doesn’t know how to deal with babies, and is refreshingly awkward that is more drop-my-voice-into-a-lower-octave-when-goofing-around-with-Ben than I-must-pretend-to-act-awkward-so-my-stunning-beauty-doesn’t-distract-the-guy-I’m-crushing-on. Rounding out the quartet is Tucker, as played by Taj Mowry, who is anal about the apartment’s food supply, a little dumb, and possibly a little gay? He tends to dress in waistcoats and button-ups and is positively tiny when lined up alongside Danny, and has the annoying habit of scrunching up his nose and overacting his annoyance about the unwanted change that is being wreaked upon his apartment, a character quirk which I hope will be quickly written out.

The credits came on after Ben opened the door to find Emma sitting prettily in her baby seat, after a flash of serious introspection that took a step away from the slapstick and cheesy playacting, which piqued my interest and convinced me to keep watching in hopes that the show would take advantage of JLB’s ability to emote through a single facial expression.

I absolutely love the dynamic that the writers are creating between Riley and Danny: goofy and chill, possibly setting them up to be BFF, or at least taking advantage of their differences in height in the best way. But then, of course, Danny softly admits his one-sided crush on Riley, which, frankly I was disappointed I hadn’t picked up on, and then my heart goes pitter-patter and now all I want is for the two of them to get together, Ben and his necessary character development be damned.

BARBARA JEAN! Sure, Peterman is officially playing “Bonnie,” aka Ben and Danny’s mom, but to me, she’ll always be Barbara Jean, and her dramatic entrance into the apartment was just spectacular. I especially love that the show is using her to voice such blasé opinions about pre-marital sex, birth control, and single parenting. Better a breezy attitude than the eye roll-inducing, preachy tone of the unfortunate “Secret Life of an American Teenager.” 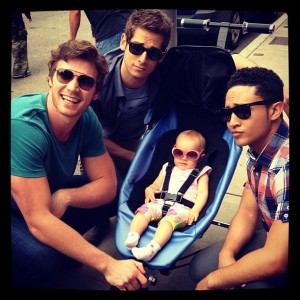 The only parts of the episode I winced through was the obligatory montage of Ben grappling with freaking out about looking after Emma all by his lonesome and the predictable physical humor utilized by the three friends when they contort their bodies around the front door so Ben can’t see them through the peephole. I actually laughed really hard when Ben put on goggles and gloves and used tongs to diaper Emma, only because that scene came up moments after Tucker revealed that Ben has OCD and that “bodily functions [make] him queasy.” The gratuitous shots of daddy bonding with baby was tolerable because the next scene showed that despite the instant burst of affection Ben might have for Emma, and his vow to do his best by her, he and his friends didn’t miraculously turn into amazing baby handlers and were still struggling to keep up with Emma’s demands of feed-sleep-bathe.

Memorable quotes:
“Is she okay? Is she having fun?” Or, in one of the better scenes of the episode, big, hulking Danny is anxiously holding onto Emma in an awkward grip, Riley forcing him to hold the baby while she dealt with the dirty diaper.

“Oh, Ben, I never noticed how sparkly your eyes were.” Danny to Riley, as he makes fun of her for her obvious crush on his little brother, in an attempt at blackmail. (It’s safe to say that Danny is beginning to emerge as my favorite character.)

“You’re so thin now, you should wear a bell.” Bonnie, unsuccessfully trying to backpedal after loudly griping about Riley’s mom in front of Riley.

Bonnie’s whole montage about how she could’ve been a supermodel, if it wasn’t for Uncle Danny and his giant frame, as she talks to Emma on the couch, was the highlight of the episode.