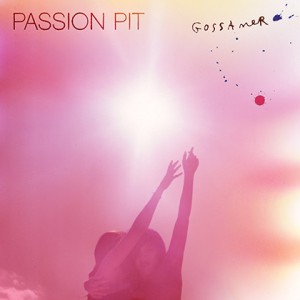 Passion Pit has a unique, electro-pop sound that I could listen to for days on end. Forming in Massachusetts in 2007, Passion Pit has brought together the musical talents of Michael Angelakos, Ian Hultquist, Ayad Al Adhamy, Jeff Apruzzese and Nate Donmoyer, creating sounds that are instantly recognizable by fans of the group. Their first album, Manners, can be chalked up as a success, and based on popularity ratings on the Spotify application, Gossamer is a crowd pleaser as well.

Gossamer has been hyped up to me, not exaggerating, for over a year. I first heard they were working on something new last summer, and I have been anxiously poring over the Internet waiting to finally enjoy the synthesized beats that Passion Pit has to offer. Well, ladies and gentlemen, the album has FINALLY been released, and although it’s not as synthesizer-heavy as one would have thought, it certainly does not disappoint.

“Take A Walk,” both the album’s opening track as well as first single, immediately bears similarity to the sound that Passion Pit is known for: synthesizers and the unique, almost muffled sound of Angelakos’s voice. Similarly, “I’ll Be Alright” has screeching and squeaks in the background that remind the listener of the biggest hit off Manners, “Sleepyhead.” I feel as though these songs were Passion Pit’s way to remind their listeners that they are still capable of making fantastic electropop beats, but they don’t want to bore their listeners with the same old sounds: the rest of the album proves their incredible versatility as a band.

Throughout the entirety of the album, complementary voices have an effect on the way the music is delivered. This could have been a fairly flat album with only Angelakos’s voice present, but almost every song features some sort of background vocals to help better highlight how utterly unique his voice is. This is most evident on the track “Carried Away,” where a female singer helps to create the staccato rhythm throughout each chorus, as well as sprinkling in “oohs” during every verse to complement Angelakos’s voice. This female sound is featured quite a bit on this album, which I feel differentiates it from Manners.
The most different sound on the entire album is easily “Constant Conversations.” It’s not my favorite song on the album, but it definitely has its redeeming qualities. Originally, I thought my music player skipped albums because this song sounds SO far from anything I would ever peg Passion Pit to make. It sounds like an old-school R&B slow jam, but it has Passion Pit characteristics, such as the “ooh”-ing female vocals complementing Angelakos. Although I think this song sounds too sexy for Passion Pit’s style, I appreciate the risk they took in trying to make a completely different sound for themselves.

The album also includes an interlude: a 34-second a cappella song entitled “Two Veils To Hide My Face.” This song serves as an excellent break between the more traditional Passion Pit sound (with the exception of “Constant Conversations”) and a different experience. I was ecstatic about how the end of this album sounded; I feel that Angelakos tried new ranges with his vocals. The way he typically sings sounds like he’s straining his voice in an uncomfortable way, but the last songs of this album sound like he is relaxing more than usual and singing with his real voice. Do NOT get me wrong — I LOVE his unique singing style, but it was refreshing to hear that he has such a wide range to offer.

The album ends with “Where We Belong,” which is a very adequately titled track to describe the mix between old and new Passion Pit sounds. They tried new things on this album, but they also kept their unique flavor. I understand that this album, with its electropop influences, might not be for everyone, but I would definitely give it a listen. I think there is something for every music lover on this album: rock, pop, electronic and even a little bit of R&B!