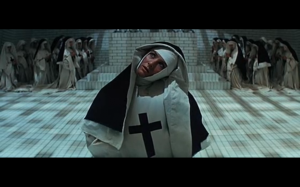 I’ve been a bit afraid of my mind recently (and the newest Evil Dead trailer hasn’t helped. Not Safe For… Anything). Whenever I’m in a life moment that I really want to savor, like calmly kissing a loved one goodbye on Christmas Eve, I get anxious and muddle it all with horrific, dumb thoughts. Before I know it, I’m having the vision of my loved one slipping and beheading themselves or maybe I dream that I let out a tremendous fart. Turns out, in life-hindering doses, this is OCD behavior. Are these thoughts “true” and I’m just fucked up, or are they a product of my intense wanting for moments to be perfect? What is the worst that our thoughts can do to ourselves? Imagine if your obsessions were not just personally embarrassing but promised you eternal damnation in Hell (in your belief, of course). Now you’ve entered the personal anguish displayed in The Devils (1971). 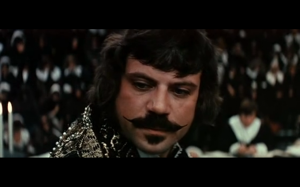 The headline for this film will read “Scene where nuns have a crucifixion orgy,” and that will be true. It’s very difficult to find an intact version—it was rated X in both Britain and the US—but you can find that sexy Jesus scene online very easily. The movie itself is so much more. The Devils recounts the death of Urban Grandier (Oliver Reed), a Roman Catholic priest who was burned at the stake in 17th century France for witchcraft. In the film, Grandier embraces his urges for sex and love and sleeps with women in his church. But he does so in a noble, human way: “My intention is different,” he tells a fellow clergyman. He wishes to turn the evils of the world against himself. Intentions aside, Grandier impregnates the daughter of a magistrate in the middle of a political and religious shakedown in France, brought on by the hands of Louis XIII and Cardinal Richelieu. A sexually repressed nun infatuated with Grandier becomes the key that the statesmen need to pin the devil onto the overly zealous priest and take him down. 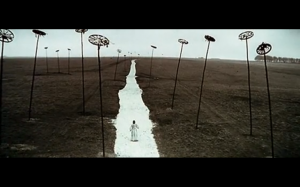 Another scene matches the tone of the nudie nun scene in which Sister Jeanne (Vanessa Redgrave) has a sexual fantasy with Grandier as the crucified Christ. While leading prayer in the convent, she dreams of the priest floating down from his cross and embracing her. She kisses and licks him all over his body. The real Sister Jeanne appears rattled, physically trying to shake the thoughts from her mind. When she looks down at her clutched rosary, her palm is full of blood. Extreme sexual repression, as we all know, is a one-way ticket to Cray-Cray-Town, and the scene is perhaps the best contrast with the liberated life that Grandier leads. Who hasn’t had an “impure” thought, one that startled you? We all know the loop created from thinking something terrible, then thinking about that thinking, and consequently exciting the whole process and deepening the image even more. Calm acceptance and exposure—like Grandier defends during his downfall—are perhaps the solution to Sister Jeanne’s woe (and to a much lesser and sillier extent, my own).

But the problem with The Devils, like so many films that shock, is the over-simplified billing and outright censoring that it receives today: it’s just that nun-masturbating movie. I was surprised to find that the possession scenes are mere background to Grandier’s saga. The plot is a historical one worth sinking your teeth into: it traces a tormented spiritual soul among the likes of Hawthorne’s Reverend Dimmesdale or Miller’s John Proctor. Warner Bros. has yet to properly release an uncut DVD of the film, and fan petitions are falling on deaf ears. Ken Russell has put together an intelligent film that has chilling sound design, a boisterous performance by Oliver Reed, and that fuzzy 70s charm that should put it in the same religious-horror camp as The Exorcist. But, apparently, so controversial is its content and undoubtedly fearful are Warner Bros. execs of the powerhouse Catholic Church that we may never see the real Devils. Well, we all know what happens when you bottle up what you truly are and attempt to ignore it: your nature will storm back tenfold.