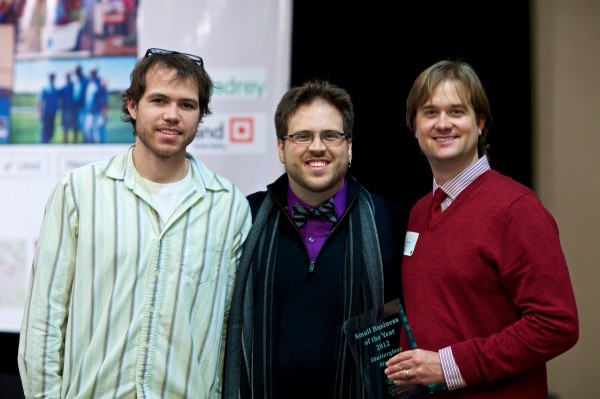 Shatterglass Studios will have quite the 2013; between putting together local workshops where people can learn about some of the more technical aspects of filmmaking and hosting a screening that includes a meet and greet with the filmmaker, the film production company plays an active part in engaging with the local film scene. Buzz recently caught up with co-owners Brett Hays and Luke Boyce.

» buzz: I think there will be people surprised to find out that there is a film production company in Champaign. How did Shatterglass Studios get started?

» Luke Boyce: It started about seven years ago. It was a situation where me and some other people got together with a business man in town and decided to make a media company. We wanted to make films but we needed to pay the bills as well, so we decided to have a company where we could acquire the equipment needed to do all that stuff and use the filmmaking skills to also make promotional videos, commercial videos, things like that, and kind of do both at the same time.

» Brett Hays: We realized it was a lot harder to do. It wasn’t as easy as just getting the equipment and going forward. It took us time. I came on eight months later, I had just graduated from U of I. Within a year, I met them and it just took time for us to perfect what we were doing and have people hear about it.

» buzz: Tell me about your work with up-and-coming and local filmmakers.

» BH: The thing about film is its collaboration ­— it’s definitely collaboration in the perfect sense so it’s always about teaming up with filmmakers, and so we did our first big short. It was called Sugar and we teamed up with filmmakers in Chicago and shot it there with Alex Beh and Pete Biagi and built relationships and started relationships there. We are always trying to build relationships with filmmakers, especially here in the Midwest. It’s not like L.A., where everyone you meet is a filmmaker. Everyone in the Midwest does something, and when they want to make film, they do film on the side. So we just spent many years building relationships with other filmmakers. There are filmmakers in Champaign and Urbana, so we helped start the CU Film Society, which is a community organization to do workshops and screenings for anyone in the community to learn about filmmaking, and that’s one way we have partnered with other filmmakers in town. There is no true filmmaker in Champaign that that’s all they do, so it’s a matter of teaming up with people who are interested in making film, finding good crew people and stuff like that.

» LB: To add to what Brett said, the issue is that in a place like this, a lot of times you have to look under a rock to find a filmmaker because everyone does other things. There are no full-time filmmakers in town, but there are a lot of people interested in film, and now that everyone is able to have a camera, there are a lot people who like to make film and want to be a filmmaker. That’s one reason we created the CU Film Society — to lift some of these rocks and let people know that there is an organization to help foster that a little more. Even on our end with Shatterglass Studios, we work a lot with departments of the U of I and we have several U of I interns and some non-U of I interns who we like to bring in and help foster their interest in filmmaking as well. The best thing you can do as a filmmaker in a place like this is not be shy. Let people know that you are interested in it and do it because there is always someone. There is always someone like us who wants to work with you. So that’s one thing we try to do: We try to kind of find those people, find those interests.

» buzz: Some of your projects include Sugar, Leading Ladies and The Drunk. What drew Shatterglass Studios to these films?

» BH: Sugar was because of Alex Beh’s charisma. I wanted to work with Alex when we meet him. We were working on a project up in Chicago and he had not done any film yet, but he just has this charisma that you’re just like, all right, this will be fun, and that project grew and grew from when we first talked about it. Leading Ladies was a project where they sought us out because we had worked with Pete Biagi on Sugar, who was the cinematographer. They wanted to work with Pete, and we had a relationship with him, and we were here in Champaign. Then The Drunk­, same thing ­­— Biagi wanted to use us to work on The Drunk because of Leading Ladies. Each one kind of grew from each other, working with other filmmakers building relationships. What attracted us to it, well with Leading Ladies, it’s a fun movie that was coming to Champaign. It was a little movie but at the same time had big ambitions. The Drunk definitely had big ambitions so I think just the challenge of trying to do more and expand a little bit is what attracts me to projects. It’s okay to go back and try small projects and little projects as well — it’s not like you have to keep going and doing bigger projects, but I think the challenge is always exciting. The big thing is working with the family, the crew, hiring the same people or finding new people building these relationships is what attracts me to film.

» LB: Most independent filmmakers and local filmmakers specifically work on the level of keep it small, keep it intimate, keep it basic and that’s great. What I think sets us apart is that we think big. We want to do big things; we want to do big productions, big budgets. Every now and then we will do a little, and there is nothing wrong with that — sometimes that’s fun to do, but we are dead serious about it. We are here for the work. We are for the film, so we actually want to put it out there and do stuff with it.

» BH: So Luke isn’t misunderstood, that other people here don’t want to be big, they do.

» LB: I’m not saying here, I’m saying in general. Independent filmmakers — it doesn’t matter if it’s Champaign or Madison, Wis. or such and such — I’m saying everywhere in the world.

» LB: Most people think if you do what we do, you have to be in Chicago, New York, or L.A. This is kind of the trifecta of film production so we kind of thumb our nose at that idea and say you can be here and do big you don’t have to be in L.A. to do big.

» buzz: Shatterglass Studios won the Champaign Chamber of Commerce 2012 Business of the Year. If you had any advice for young entrepreneurs/film lovers, what would it be?

» BH: Advice for college entrepreneurs: When I was a senior in college, I started my own business. That’s what got me excited about business. I was going to school for Art and Graphic Design. I can stand on a soap box — with our interns I’m usually on a soap box — but I will keep it to one, and that is just build relationships. It is so important; this is a little different than what I would say about film, but as far as the business side, it’s not a matter of what you do but who you know. Personality is key for us and just building relationships with people, and that’s on the business side. On the quality side, it’s producing the best possible work you can do. Doing everything you can do to make the client happy to making sure they get the best possible product. On the film side, who you know can get you far, but working hard is the key on a film set­ — working so hard that the boss or manager never has to worry about them. Hiring crew who are self-sufficient and are out there getting it done. Find like-minded individuals who are willing to work as hard as you.