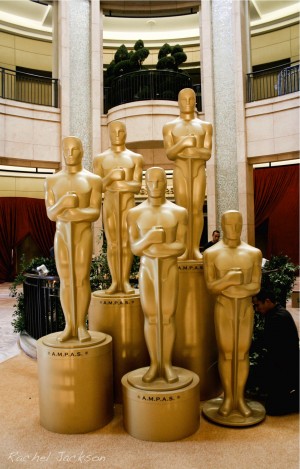 Oscar and his family. Used with permission from Ebb and Flow Photography and Creative Commons.

The 85th annual Academy Awards nominations have been announced, so it’s time to take a closer look at the upsetting and the unexpected.

SNUBS
Django Unchained — Leonardo DiCaprio for Best Supporting Actor, Quentin Tarantino for Best Director
Django Unchained marks the fifth time DiCaprio has appeared in a Best Picture nominee but has not been nominated himself. He has never won an Oscar. Sure, you can argue that Leo plays his characters with similar affectations, often offering an undifferentiated, anxious enthusiasm. But what if that identical energy is just damn good? Regardless, Calvin Candie marks Leo’s most colorful and unique character role to date. And it’s not every day that the eccentric Tarantino offers you an expertly crafted live-action cartoon to bounce around in. Although he has scored two Best Director nominations in the past, Tarantino was snubbed again, despite dreaming up a ceaselessly bold narrative and splattering it with his fearless, deft control on screen. Django is easily one of his best. If only they could award both men at the same time, with DiCaprio in full Calvin Candie regalia and Tarantino mounted with some of those jelly-flesh explosive effects he loves so much. Then we’d really have an award show worth watching. —Ben Mueller

This is Not a Film — Documentary Feature
Most of the documentary features for the 2013 season are complete with effective approaches to serious conflicts that have occurred across the world, and one engaging investigation of an enigma in the music industry. But the absence of any nominations for Iranian filmmakers Jafar Panahi and Mojtaba Mirtahmasb, who illegally shot This is Not a Film while Panahi was under house arrest, is, quite frankly, a damn shame. Faced with a prison sentence of up to six years and a ban on filmmaking, Panahi documents himself, with the help of Mirtahmasb, performing daily activities that revolve around his film career on the line. A bold, creative statement in the face of cruel authority, this is one project that needs the support of artists everywhere to stand behind Panahi and Mirtahmasb so that the right to expression remains a due universal freedom. —Adlai Stevenson

Argo – Ben Affleck for Best Director
C’mon, man. What does this guy have to do to get the Academy’s attention? Argo is up for Best Picture, but Affleck directed his ass off for this one. In my opinion, it was the most enjoyable movie to watch out of all the other nominees. It was awesome to witness the knuckleheaded friend from Good Will Hunting absolutely kill it in a leading role and have him direct the hell out of an Oscar-nominated film. Steven Spielberg was a no-brainer. Ang Lee did something only a few have done before. But Affleck needs to be up there with these guys. Did you see his freaking Golden Globes speech? It was phenomenal. Argo took home best film and best director at the Globes; Affleck deserves some more love from the Academy. This guy is wicked smart. —Patrick Filbin

Lawless — Guy Pearce for Best Supporting Actor
Yeah, I said it. If any of you have seen this movie and you disagree, then you’re dumb and I hate you. And if you haven’t seen it, I highly recommend that you do. His performance as Deputy Charlie Rakes was my favorite villain of the whole year (yes, including Bane). I haven’t seen Pearce this good since, well, ever. He was the only guy who stood up to Forrest Bondurant (Bane!) and his moonshining brothers just because he believed in the almighty power of a Thompson submachine gun. I understand this was a tough category to sneak into, with the likes of Tommy Lee Jones, Alan Arkin and Christoph Waltz. I get that. But De Niro wasn’t even the De Niro we all love and praise. I knew Lawless wouldn’t get as much recognition when it came down to it, but I was super bummed when Pearce didn’t get the nod. —Patrick Filbin

SURPRISES
Flight – Denzel Washington for Best Actor
Flight is one of those films that only works because of its lead actor. To say that Denzel Washington helps carry Flight would be an understatement, because in the hands of a lesser actor it would have crashed faster than the plane. What should be an intense character study of a man who has finally given in to years of alcohol abuse is instead a messy and overwrought soap. Washington more than pulls his own weight, but this nomination is a surprise because the material on the page gives him almost nothing to work with. The script would be better suited for a mid-season episode of one of those hour-long cop/detective/law procedural shows that networks like CBS seem so fond of. —Joyce Famakinwa

Silver Linings Playbook – Multiple Nominations
David O. Russell will return to the Oscars just two years after The Fighter, now with a film that’s received eight nominations. Bradley Cooper plays the mentally troubled Pat, who’s trying to get his past life in order when he meets Tiffany, an unsettled young woman with her own baggage and another impressive, tough turnout from Jennifer Lawrence. Cooper and Lawrence don’t portray themselves to be kooks, but instead as frantic, irascible individuals who require trying measures of patience from their equally messy families. However, that doesn’t take away from its zany humor, even with the foreseeable plot of the movie. But does it deserve to take home its majority share from the Academy? Hard decision. —Adlai Stevenson

Beasts of the Southern Wild – Dwight Henry for Best Supporting Actor
Everyone is buzzing about the nomination of 9-year-old actress Quvenzhané Wallis, and while it is her character, Hushpuppy, who brings the viewer into the dreamlike southern bayou known as The Bathtub, it is Dwight Henry as her father, Wink, who pulls the film back to reality. On screen, Henry displays an almost never-ending amount of raw energy that isn’t always pretty to look at. It is a challenging role, but Henry never gives into scene chewing; he focuses on containing this very explosive character. Wink is the kind of role that a veteran actor might struggle with, so this is even more impressive coming from a first-time actor. The fact that his work is overlooked is simply disappointing. —Joyce Famakinwa