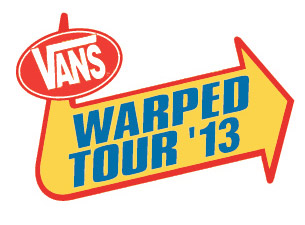 Got a case of the winter blues?  Don’t fear, Vans Warped Tour is near! Every summer Warped Tour travels across the country bringing live bands, artists, entertainment, and more to several cities near Champaign-Urbana including Chicago, St. Louis, and Indianapolis. For those of you who have been to Warped Tour, you know that it is a day full of excitement and a chance to see some of your favorite bands all in one place. If you haven’t attended the tour you don’t know what you are missing, and I highly recommended checking it out this summer. While the lineup for the 2013 has not completely been revealed yet, I give you this play list of past, present, and hopefully future bands playing the tour.

Lead singer Devin Oliver has an brilliant voice and lucky for Warped fans, I See Stars will be appearing on the entire tour. After playing several smaller stages throughout the years, hopefully the band will get to perform for a larger audience this year as their fan base grows.

Warped veterans Memphis May Fire may not have been announced to play this summer’s tour, but there are still many bands that have yet to be announced.  Their latest album, Challenger, features the song “Legacy”.

Being one of my favorite bands, I still am hoping that Pierce the Veil will be present at Warped Tour this summer. However, just in case they are not, give the song “Hell Above” a spin. It comes from their latest album, the fantastic Collide with the Sky.

Super soakers, fog machines, beach balls, and light shows- no other band knows how to put on a show like Breathe Carolina! With any luck BC will return and play Warped again this summer.

One of the bands officially announced to play this summer is American deathcore band Attila. Although they will not be playing at any of the tour dates around CU, they are definitely a band to check out.

Another band that has been confirmed to be play the 2013 tour is Woe Is Me. After making some chances to their lineup, it will be interesting to see what kind of performance the band will put on this summer.

Anarbor will be playing the entire Warped Tour, and if you’re in the mood for some upbeat alternative rock, they’ll be a great band to check out. “You and I” is off an older album, but seeing as how it’s a crowd favorite, I wouldn’t be surprised if they played it this summer.

Chiodos is no stranger to Warped Tour and although they have not been officially announced to play this summer, the band is back, better than ever and hopefully they will be gracing main stage once again.

Show stoppers Asking Alexandria truly know how to put on a great show. After playing Mayhem Festival last year, hopefully the band hasn’t outgrown Warped Tour, and will return to the festival again this year.

In the third round of band announcements, Vera Emerge was officially confirmed to be playing the entire tour. “Fixed At Zero” is from the bands debut album, and truly shows off the talent of lead singer Sierra Kusterbeck.

11. Hawthorne Heights- “Ohio is for Lovers”

“Ohio is for Lovers” is of course one of the bands older songs, however it is one of my favorites. If you want a song to take you back to 2004, this is it.

Just when fans might have given up hope of seeing The Used again at Warped Tour, they surprised everyone and came out and played several cities on the 2012 tour. Although the chances of seeing them again in 2013 are slim, you never know who may make a surprise appearance.