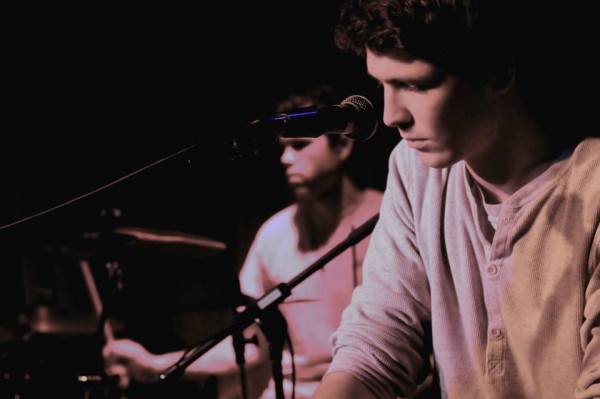 I was able to speak with Myles Beeson, drummer and percussionist of the Beeson Brothers, about family band dynamics, influences, new material and what to expect from their show this coming Thursday at Canopy Club.

» buzz: So many bands have been started with brothers such as Kings of Leon, The Kinks, The Beach Boys, Oasis and the list goes on. How does this personally impact your band dynamic? I know you’re the first band I’ve heard that consists entirely of brothers.

» Myles Beeson: Right, I’ve been in numerous bands throughout grade school and high school and whatnot, when I was in bands with friends. It’s more difficult to organize practices and stuff like that in high school, and after high school, everyone went off to college and got jobs. Those bands I was in all split up and I haven’t played with them in eight years, so it’s cool that I’m with my brothers, I’m going to know them five, 10, 20, 30 years from now and we can still play. I’ve basically lost contact with friends over the years, or they’ve moved to different geographical locations, but I know at some point I’ll always be in contact with my brothers. Ryne, who plays lead guitar, I’ve been playing with him – we started together – we were in our first band together, that’s how we started. The band was me, Ryne and my two older sisters, actually, and I’ve been playing with them since, so it worked pretty well. Aside from that, we all have very similar musical influences, which is really cool because we’re all interested in the same thing. Our dad would always turn on the oldies station in the car when we were little; we had a big ‘60s influence, which had a big blues influence. So I think it works well on several levels. When we were in grade school or high school and we needed to organize practices, we were in the same house, you know? Communication and staying in contact is so much smoother with brothers who are interested in the same thing. So it works really well; we’re on the same page as far as that stuff goes, and again, our first band was with Ryne and I together. We’ve just been playing together for so long, and if you play with other musicians for quite some time, you get tighter. You play together better.

» buzz: Yeah, that’s very cool. It seems like you have a very musical family. A lot of your performances feature your sister as well, doing vocals.

» MB: Yeah, like I said, when we started our first band, it was Ryne, me and my two older sisters, Colleen and Kathleen. At the time, Ryne actually played bass. He only switched to guitar about five years ago. He was always a bassist, but he was kind of wild on the bass. He would almost play lead on the bass, so I think it transitioned well to lead guitar. My younger siblings all picked it up because Ryne, Colleen, Kathleen and I are the four oldest, so we decided to make a band when we were fairly young; I was the youngest in that band at the time. Since then, all our younger siblings would watch us and come to our shows and would see us practice, so they just picked it up. I’ve got one young sister who plays violin, all my sisters sing, and my younger brothers picked up guitar, bass and other instruments. We’ve got a big family. There are 11 kids, but it’s cool because everybody plays music.

» buzz: That’s sweet, especially because you all have the same types of influences.

» MB: Yeah, so it’s awesome when we get together over the holidays. One of my older sisters, Kathleen, lives out in Oregon, and she’s got an awesome voice. She plays mandolin, acoustic guitar and a whole bunch of different instruments, so when she comes back for the holidays she joins us for shows. Same with my other sister. So, at any time, there’s eight of us up there, and that’s really fun because we can play similar stuff and we like the same music, so it’s really cool.

» buzz: So, is there just a love of performance and singing the blues running through the family?

» MB: Yeah, well, when we play with my sisters, we incorporate other styles, too; we play quite a bit of folk music with them as well. Two of my sisters have a folk band, like folk rock, but we play other genres too, especially with them. But the Beeson Brothers, just the four of us, play primarily blues-rock. We listen to a pretty large array of music, but most of it is influenced by that ‘60s and ‘70s music that we would call oldies now, and a lot of those musicians had a blues influence. But we do have a big influence from a lot of newer blues, too, like The Black Keys and Mississippi Blues, like the North Mississippi All-Stars. At The Great Cover Up, we covered Stevie Ray Vaughan, who has a Texas blues style, and obviously we’re around Chicago, so we get quite a bit of a Chicago blues influence. But we still cover other genres outside of blues, especially when we play with other musicians like my other siblings and my sisters.

» buzz: Yeah, of course. So, throughout the family then, is songwriting impacted at all or do you guys play mostly covers?

» MB: No, songwriting is the same because it’s a communication thing. Our family is pretty close, so we talk a lot to each other, so it’s not difficult for us to come up with an idea and share it with one another. During practices, if someone comes up with an idea, we can share pretty easily. We cover some stuff, but it’s a good mix; we’ve got quite a few originals and are coming up with more and more, so we’re pretty excited to get those recorded.

» buzz: So, can we expect an EP or an album of originals coming out anytime soon, or this year even?

» MB: Yeah, we’re hoping for this year. We’re definitely working on that and we’d like to put out at least an EP or an album sometime soon – hopefully later this year. And like I said, we’ve got a bunch of originals already set that we’re wanting to record and we’ve got more that we’ve been working on. So, I could definitely see something coming soon. That’s what we’re hoping for.

» buzz: Cool, that’s very exciting because you guys have done a bunch of big shows. You guys have played The Great Cover Up, you’ve played at Indiana University, and even Summer Camp, so what can we expect for the Canopy Club show coming up? Performance and set list and what-have-you; what do you think about it?

» MB: Yeah, the Canopy Club show will be a lot of fun; we’re playing with two other bands. Sonny Stubble is another local band; they’re really awesome. They played at The Great Cover Up, and they also played at Summer Camp. We’re playing with a band called IndigoSun. They’re from Chicago and we’ve played with them before as well. They’ve played at Summer Camp and stuff like that. It’ll be a really good lineup. I think each band is doing an hour set, and we’re going to do a mix of some covers and originals. Like I said, it’ll be mostly blues-rock music — some Mississippi blues and some newer blues, so, yeah, it’ll be a really good time. I think we’re playing 9:40 to 10:40.

» buzz: Yeah, sounds like it’s going to be a great show!

» MB: Hopefully you can make it out this Thursday. I don’t know if you’ve heard those other bands, but they’re really fun to play with.

Thursday, Jan. 31, come out to The Canopy Club to witness this great, brotherly band in action. It’s bound to be an incredible time.