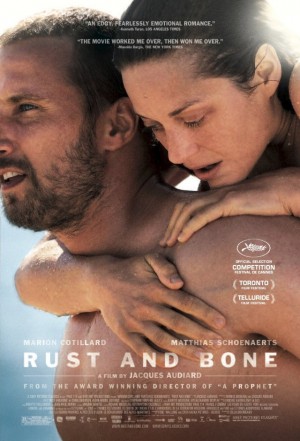 Rust and Bone, used with permission by Sony and Creative Commons.

So said someone behind me in a Chicago theater when the trailer for Rust and Bone played a few months ago. That’s a genre now? Outside of last year’s The Intouchables, which even then is stretching it, I’m hard-pressed to find many candidates. Even if there was, it’d be hard to set the bar higher than this: A rare movie high that jolts you with nearly every rush of image and sound.

Disregard that smart-ass’s quip: Rust and Bone is less a love story than an unusual relationship that resuscitates the raw marrow of its characters to a soul-renewing transcendence. If you liked When Harry Met Sally, you’ll like Rust and Bone.

Both stylish and forthright, the film opens after a rush of superimposed images to scenes of Ali, a father looking for food around a French city with his young son. However, the scene is neither desperate nor bleak. Set to music by James Blake, the scene never becomes a dirge and much of Rust and Bone finds warmth in unfortunate circumstances as well.

As Ali, Matthias Schoenaerts has kept the muscle he displayed in the Oscar-nominated Bullhead, but here with a much more startling physicality barely bottled up by a short fuse developed from lifelong ties to back alleys and bad luck. With nowhere to go, Ali and his son move in to his sister’s apartment to have a roof over their heads.

But Ali hardly comes off as an enduring joe who immediately draws sympathy. He rarely shows his son any love, and even when he sees his sister for the first time in years, they are coerced to hug by an unsuspecting brother-in-law.

He runs into Stéphanie, played by Marion Cotillard, at a nightclub gig after breaking her up from a nasty bar fight with the hopes of following that wobbly strut to bed. Although Ali’s plan doesn’t exactly work out, you don’t have to see a trailer to know that they will meet again. But to guess what follows would be pretty damn impressive.

Stephanie, unhappy and vain at heart, works as a cheery whale trainer at a SeaWorld-type aquarium by day. But one show goes horribly wrong and she wakes up without her legs in a hospital hours later. Cotillard is in the much showier role compared to Schoenaerts’s, but she wisely remains restrained for most of the movie and her recovery is never corny. If there ever was any doubt about Cottilard’s acting ability, this movie would settle it. But her performance is even more refreshing to see her hit so high after a string of slightly disappointing, overshadowed roles in several American movies.

Ali visits Stephanie months after the accident while she has isolated herself, but he treats her with little sympathy and patience. After dragging her outside, he then leaves her near a park bench so he can go swimming. Hell of a carer, right? But Stephanie is hardly repulsed by Ali’s inconsiderate behavior and soon they are spending a lot of time together as … friends? Dependents? It’s definitely something else, but they both have a lot to gain from it.

Rust and Bone keeps up an engaging pace with kinetic camera work and quick rhythms. Director Jacques Audiard, as with his very different but effective crime films A Prophet and The Beat that My Heart Skipped, always finds something new and alluring to cut to. It keeps the scenes dynamic and his choice of music is still as catching and surprising as ever with effective use of house music and even Katy Perry’s “Firework.”

Parts in Rust and Bone may come together too conveniently by the end, but the biggest achievement is that it treks as long as it does convincingly. It hits the screen with rough, vivid texture in the lives of its unsavory characters but ultimately finds hope in them. This sounds cheesy, but Rust and Bone goes beyond its own limits.