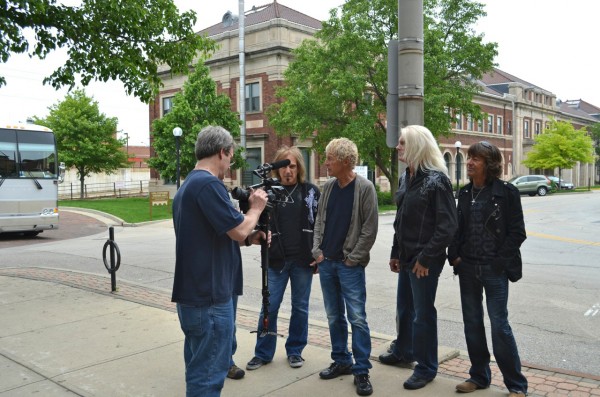 Before there was The Highdive, Cowboy Monkey, Canopy Club or even Mike ‘N’ Molly’s as we know it, the CU music scene thrived in campus bars. Cover bands played nightly and sold records, and REO Speedwagon made it big but still flew their plane to out of town shows so they could make it back in time for the last call at Red Lion. This is the music scene portrayed through the interviews Bob Zimmerman conducted for his documentary Out of Nowhere. The film chronicles the tales of musicians and everyone else involved in the scene here in Champaign from the 1960s on. Buzz got a chance to sit down with Bob and talk about some of the things helped and continue to help our local music scene.

»buzz: How did you become involved with the music scene?

»Bob Zimmerman: If you go back into the ’70s, when I first got into it, I was working for bands like StarCastle and just different local bands. Go back to those days, I was kind of involved in that way. I’m not a musician or anything, but I knew a lot of the musicians around town and just saw a lot of the music scene from way back then growing up.

»buzz: What gave you the idea to make a documentary about it?

»BZ: It’s something I’d thought about for a long time cause I knew just how good the music scene has been and I always thought it’d be a good story, and other people have always talked about the music scene and how it’d be a good story, so in 2010 there was a band that was having a reunion, The Finchley Boys, and they were playing downtown Champaign. They got together after like 30 years and I thought this would be a good time to start. And I did. And I just spent two years tracking down different bands.

»buzz: What’s the coolest thing you learned making the film?

»BZ: How nice a lot of the musicians really are. Even people you might think of like REO Speedwagon, or somebody like that, they’re just a lot of the musicians are really down to earth and a lot of people in the music scene even today like Ryan Groff [of Elsinore] are just really helpful people and they really enjoy what they’re doing.

»buzz: REO Speedwagon are probably the most popular band to come out Champaign, do you agree?

»buzz: How important were they as part of the scene here when they were rising?

»buzz: To what degree do you think the music scene here is dependent on students?

»BZ: It’s definitely a big part and it always has been. It used to be back in the ’60s and ’70s the campus was where you go. It wasn’t downtown Champaign or anything — it was campus. And you always have a continuous flow. Without the students and the continuous flow of new people all the time, I don’t think we’d have near the same [scene].

»buzz: In the film, there’s discussion of the “bar band scene,” which more or less doesn’t exist anymore, at least in campus bars. That could be a reason why the music scene has kind of moved off campus. Why do you think that doesn’t really exist anymore?

»BZ: Well, we used to have the Red Lion down here and there was just bar after bar with bands every night playing. If the University doesn’t want to have that down here or people like Cody [Sokolski, of Delta Kings] who’s put a lot of stuff in downtown Champaign, they’ve really developed that area.

»buzz: What happened to the Red Lion? You interviewed a lot of people and they talk about it in the film, but it’s really changed since then. It’s not the place to see live music anymore.

»BZ: The only time we’ve been in there was when REO Speedwagon played — when I did the interview. They went in after the show at the Virginia Theatre and played two songs. They went back to the Red Lion. It was pretty cool. You can see some of the video in the movie where the mayor’s on stage. That was at the Red Lion. I think the Red Lion back then was really the place to go. It was one of the places to go like Mabel’s was later, and I don’t know if there’s really a place now like that where if you wanted to see some really good bands you’d go to the Red Lion or you’d go to Mabel’s and earlier it was Chance the Czar but that was back in the ’60s. So the Red Lion (Continued on pg 11) was (continued from pg 9) just a place you went and there was bands seven nights a week, and a lot of good bands.

»buzz: Maybe a modern equivalent would be a bar like Mike ‘N’ Molly’s?

»BZ: Mike ‘N’ Molly’s and maybe The Highdive, but it’s still not a place you go every night. I think we’ve gotten to, with computers and YouTube, that people don’t have that same … they could stay home and watch music. Back then, it was just part of life. You had some radio stations and we had three TV stations around here, so you’d go to bars and go to concerts to hear live music. It was really different.

»buzz: Your film is called Out of Nowhere, but at the end, it comes to the conclusion that it really isn’t nowhere — it’s a great place for music. Do you think, though, that with technology it has become less of a nowhere that it maybe has been?

»BZ: Probably everywhere has — not just Champaign — but everywhere has probably become that way. What happened was, I can’t remember the record company, put a promo out and it was “They Came Out of Nowhere” and a lot of people then were like, “This is Champaign! This isn’t nowhere!” And so that’s how I got the idea for the movie, but it’s definitely less than what it used to be. And then a lot of that Out of Nowhere goes back to if you want to get recording contracts, the guy from Head East had told me that they stayed in central Illinois and ended up going to St. Louis area, but they didn’t go to the east coast and they didn’t go to the west coast, so if you’re not around here, it was tougher to get recording contracts, which you don’t have to worry about as much these days. The whole music scene’s changed on that, record companies, etc.

»buzz: Do you think it’s more of a “nowhere” to outsiders?

»BZ: It’s fly-over country. A lot of people think of central Illinois or Illinois in general, you know, but yeah — if you weren’t from here a lot of people used to think they had to get to California. I didn’t really go into it in the movie, but there was just so many bands that went to California and came back or stayed out there and did something else, but something else was you’d go to Nashville or somewhere like that and you think, ‘I’m gonna go there and be a big country star.’ Well, there’s thousands and thousands of people down there that are trying to be country stars.

»buzz: Can you explain who Mark Rubel is and what Pogo Studios is?

»BZ: He’s the recording engineer and the owner of Pogo Studios. He’s been a musician for years and years, and I think he teaches at Eastern. He’s just a really talented guy. And his band, if you’ve ever seen, Captain Rat. A lot of people have recorded there too. Elsinore, Alison Krauss … there’s been a bunch of people.

»buzz: What is your favorite band to come out of Champaign-Urbana?

»BZ: I would have to say REO Speedwagon … and Head East, as far as people who’ve made it big. You go back farther, there’s bands like Slink Rand Group, and Slink’s still around. He’s over in the western part of the state. And there’s bands like Skater and StarCastle. It’s hard to pick out a real favorite, just somebody that’s really done good and made some good music over the years is REO.

»BZ: Well first of all, it’s all the talented musicians who live here. And it’s continuously changing. There’s always a new influx of people coming in. There’s all these talented musicians who are here. A lot of them stay here and it just keeps going on and on. I can mention Slink Rand—here’s a guy that was such a great guitar player, and still is, that he had another generation of people after Slink who watched him playing guitar. And then you’ve got people like Lou Dibell, who people watched him and he teaches people, so it’s kind of just a continuous thing over the years in this town.

»buzz: What is with REO Speedwagon’s airplane?

»BZ: Like it says in the film, they used to fly out of here, and so I’m not sure where the airstrip is but they would fly to shows instead of driving. And it sounds like it got pretty wild in the airplane sometimes, and they’re all probably lucky to be alive. Actually the pilot … the last song at the end, “Flying Turkey Trot,” which is an REO instrumental song I put at the end — they called him the Flying Turkey. He actually bought a [copy of the] film, they had a kind of roadie reunion last week in Nashville. He’s still around.

»BZ: Basically what I tried to do, when I started making this movie, there was 50 years worth of music history and I started doing this and I thought there’s just too much information, so finally I just had the idea, ‘Why don’t I just make it so if someone doesn’t know the music scene, how it got started, how can I explain to them?’ So it’s maybe like an overview, but then I let [the interviewees] tell their story and I kind of tried to move a little bit with the mayor into the ’80s and ’90s scene, kind of bring it up to speed with Ryan and Elsinore. And I’ve been getting ready to do another part, which is not going to be a part two, but I got a couple ideas how to do it, but it’s going to get more of the people into the film because there’s still so many songwriters, a lot of good music, good songs that come out of this town.

»buzz: Champaign doesn’t hold anyone back, being a smaller town.

»BZ: No. It’s good that it’s a small town because it’s easier sometimes for bands to get started, you know, if you go to Chicago and Los Angeles you get lost in the crowd, it costs a lot more money. Here, there’s [sic] places to play. Guys tell me: you go to New York, you have to pay … And there’s talk in the movie, too, there’s a lot of places in the area — you don’t have to just play in Champaign. Especially back then, there was colleges all around, churches had bands … Once the scene really starts going, it just continues. It’s smaller than what it was in the ’60s and ’70s but it’s still pretty nice. You do it different nowadays. Elsinore recorded their last album here at Pogo Studios and I think they went to Portland and finished mixing it out there, but you can still make it happen here. And it’s actually probably easier. I mean, it’s actually easier to make a movie — I couldn’t have made this movie a few years ago, but now with Final Cut Pro, it’s just a lot easier.