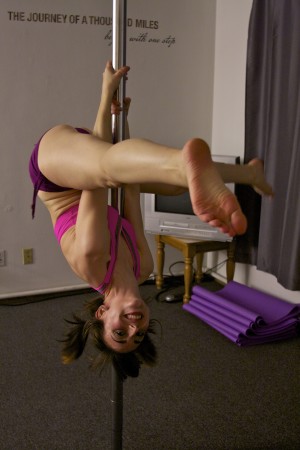 In a small studio apartment on the corner of First and Daniel, a mother daughter duo is preparing to learn their first pole dance.

“Aww! This makes me miss my mom,” said Cassie Landry, that day’s instructor, as she dims the lights. “Her and I pole together all of the time!”

Two metal poles are all that fill the living room of this apartment turned pole dance studio. From the back corner, a red lamp casts a crimson glow, setting the mood for today’s practice. The studio’s white walls are completely naked, barring an arrangement of black bejeweled letters reminding class-goers that they are “GORGEOUS.” Mirrors are consciously neglected from the studio’s décor.

“No mirrors. We just want people to focus on how it feels,” says Landry. “If it feels good, then it looks damn good.”

At its core, that’s what pole dancing is all about: confidence.

“I always feel so powerful after I pole,” said Landry. “It has helped me own my body in a way that I could never do before.”

Landry began pole dancing four years ago, at the beginning of the pole fitness boom. The pole movement has exploded in the past five years thanks in large part to actress Sheila Kelly. Kelly played the part of a stripper in Dancing at the Blue Iguana, a role that introduced her to the power of poling. She then authored a book titled S Factor, in which she created an entire feminine workout movement centered on pole dancing. Kelly founded a chain of pole fitness studios, but since the release of her book, independent studios have been popping up all over the country. 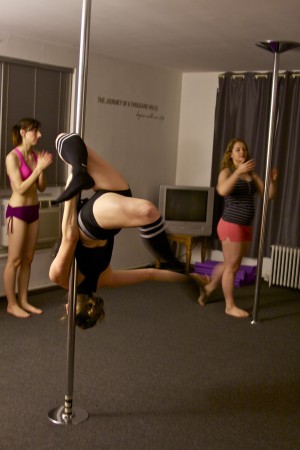 “She got it out of the closet and worked to make it less of a taboo thing,” Landry said.

Dynamic Fitness, where Landry instructs, is the only pole fitness studio in Champaign-Urbana. Dynamic Fitness was founded this past year by Miranda Dashut, a recent U of I grad who interned over the summer at a pole studio in her homewtown, Naperville, Ill.; she also recieved her official pole instructing certification from the National Pole Fitness Association. Last semester, Dashut and another student founded the first official pole dancing RSO at U of I, Illini Pole Fitness. Landry, a graduate student, is now the head of Illini Fitness, which is populated by about 30 paying members. Landry and Dashut said that when the club started, many of the members were first-timers with no previous poling experience, but since the opening of Dynamic Fitness, six or seven highly advanced dancers from the area have joined the studio.

“These dancers are coming out of the woodwork,” said Landry.

Part of poling’s allure is the sense of power and uniqueness that it gives to dancers. It is sport that has zero tolerance for inhibition and hesitation. The only way to get better and execute more complicated moves is to embrace your body and “own it.”

“As long as you aren’t worrying about what other people are thinking or about doing it wrong, then you’ll advance,” said Landry.

The essence of pole may be flirty, fun and sometimes sexual, but pole fitness classes are not intended for a captive, male audience.

“It’s really by historical accident that poles were introduced into strip clubs. People tend to associate such undesirable qualities with pole, and I think it’s our job to change that,” Landry said. 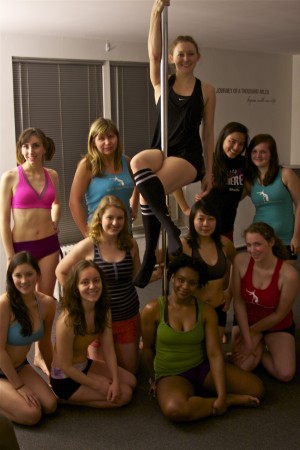 Historically, women’s gyrating hips were not always intended for male titillation. In centuries past, undulating hip movements were expressions of the female body’s power and were often used to promote fertility. Some of the earliest pole dances can be traced back to ancient, African fertility ceremonies where women would dance around pole-like objects.

“Pole dancing has existed in multiple cultures throughout history. In China, pole acrobatics has been around for centuries, and in India, there is a type of pole dance that is only for men, not at all sexual and really quite challenging,” Landry said. “It wasn’t until 1956 that the first pole dance was recognized in an exotic club.”

As a workout, poling emphasizes strength training more than aerobics, primarily working out the arm and back muscles. However, because most of the time the dancer is hanging by only their hands, most of the strength needed for pole comes from the area between the elbow and fingertips.

“I did ballet for about 15 or 16 years, lots of classical training, so I was very flexible and very fit, but I’ve never had the strength that I have now,” Landry said. “My arms, my back and especially my hands are all so strong. I have this death grip. My husband gives me the mustard jars to open now!”

While poling is typically associated with females, both Dynamic Fitness and Illini Fitness are open to teaching males, even if one has yet to sign up.

“I’ve talked with two male theater majors who do trapeze about doing some personal training. I’ve also been contacted by a few male cheerleaders who are interested in getting the cheerleading squad involved,” Landry said.

Dashut said that tension poles have a weight limit of 250 pounds, but anchored poles can accomodate just about any body size, so pole is not necesarily restricted by body type. Nor is poling reastricted to age, as today’s mother daughter pair is proving. The two are learning the three most basic poling manuevers: the pole dance, the catchspin and the fireman.

“You’re both so graceful,” Landry said as she walked them through their last trick. “It’s weird, I can tell you are mom and daughter just by the similar way you move around the pole.”

The two left looking satisfied and promised to come back for more. Mom says she thinks she’ll want one installed in her house.

“Anyone who is scared to try it, I always tell them that really have nothing to lose,” Dashut said. “Chances are, you’ll have found your new favorite way to work out.”