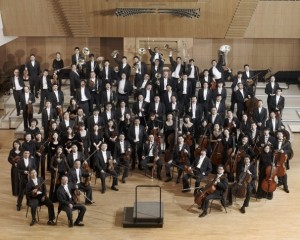 Lovers of great music will again be treated to a first-visit from a touring national symphony orchestra, as the China National Symphony Orchestra performs at Urbana’s Krannert Center for the Performing Arts on Saturday, February 23. Their program ranges from contemporary Chinese compositions that commemorate recent events, to traditional German classics and to one of the great Scandinavian concertos.

Established in 1956 as the Central Philharmonic Orchestra of China, it underwent a major change in 1996 reemerging as the China National Symphony. That change has led to more extensive touring and performing a mixture of Western classics with modern Chinese compositions. There are 14 major symphony orchestras in the People’s Republic of China, and the two in Shanghai and the one in Hong Kong have achieved more fame in the West due to their more extensive touring.

The remainder of the program will feature some familiar music from the 20th century. Richard Strauss’ exciting “Ein Heldenleben” and Jean Siblieus’ magnificent and melodic violin concerto will round out the evening. Krannert patrons will have an opportunity to hear one of the great young violinists in the world, Chuanyun Li, as the soloist in the Sibelius’ concerto. Li has already been recorded in the West and can be heard on the film score for the movie “Together.”

With their headquarters in Beijing, they are often called on to play for visiting diplomats, and our own Vice President Joe Biden has heard them in concert. On February 23 in the Foellinger Great Hall, sypmphonic music fans can make one step to leveling the playing field with Joe Biden. This is a rare opportunity to experience a fine orchestra as it spreads its international wings.

For further information go to:  www.krannertcenter.com, or call the Krannert ticket office at 217-333-6280. The top ticket price is only $48.