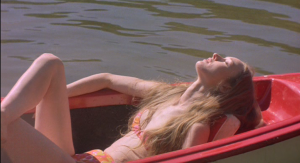 I’m never going to live down trying to watch Blue Velvet (1986) with the GF. My parents saw the movie originally play in theaters (how romantic!) and as one of my favorite films, I guess I wanted to echo that same warm memory. Instead, after viewing one particular scene of sexual aggression, my lady literally vacated the vicinity and I had to permanently turn in my “I Trust Your Picks for Movie Night” card. Aside from Friday the 13th (2009) serving as a spur of the moment Valentine’s Day flick (all the rom-coms were sold out), I’m basically doomed to watch Silver Linings Playbook (2012) on DVD for the rest of my life. My radar has been off before, but in terms of I Spit on Your Grave (1978)—the somewhat legendary exploitation flick known for its lengthy, intense rape scenes—I must echo Ebert’s sentiment: I’m hard-pressed to imagine anyone enjoying this movie, be them man, woman, or child. I don’t want to trash someone’s first film effort, and maybe I do want to credit writer/director Meir Zarchi’s bravdo just the teensiest bit, but the low production quality of this thing does it no favors, not as retro-cool, not as gross-out fun, and frankly not as entertainment in nearly any way. 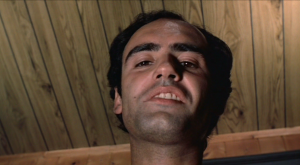 I Spit on Your Grave – originally titled Day of the Woman – is Zarchi’s only notable cinematic effort. Supposedly inspired by Zarchi’s own experience finding an actually assaulted woman one night in a park in New York, we follow Jennifer (Camille Keaton, and Zarchi’s then wife—how do you think those conversations went?!) as she tries to slink away from New York City to a quiet lake house to work on her writing. It isn’t long before a gang of four bad men (all barely fleshed out as characters) find Jennifer, kidnap her while she’s in a canoe, and one by one take turns raping her in long, separate scenes. This goes on for an hour before the other shoe drops and Jennifer starts going out and murdering her aggressors. The film was banned in both the UK and Germany, has nudity of both the male and female variety, and does get pretty bloody. Rape itself is fair game for cinema like everything else should be, regardless if you personally care to watch it. But I myself, and as I imagine most audiences who enjoy more extreme films, want a reason, an angle, at the very least a compelling story to justify the intense content. I Spit on Your Grave essentially provides none. 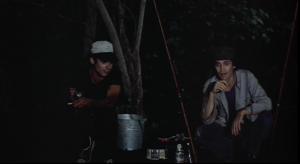 A friend of mine said that this movie had to be made by someone who hates women. The opinion’s completely justifiable. Zarchi has denied that the film is exploitive. The man needs a dictionary. The whole thing stinks of the Blood Feast (1963) variety: its movie poster and concept are really its only virtues. The movie’s early release at late-night drive-ins only adds to its cheapness (it was distributed by Zarchi himself). The whole thing is schmacty as hell, despite well-needed breaks in action that Zarchi instinctually includes. One character’s violent movements against Jennifer, in a forest no less, would only logistically work if his penis were about twenty inches long. It’s possible for a movie to get away with scenes of such extremity (again, my eyes turn to Blue Velvet). But the story must be bulletproof, and the characters compelling. And Zarchi, again, instinctually knows this: he sets up the boys’ late night conversation down by the water. It’s the perfect opportunity to learn what makes them tick, why exactly they are about to commit the atrocities to come. But the moment is lost and they joke about broads in New York. When Jennifer exhibits an inhuman disconnect to her emotions as she sexually lures in the men, we learn Zarchi sees her as one of dem broads too. 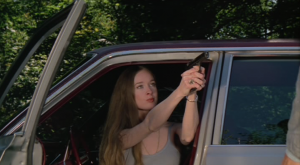 I Spit on Your Grave is cool in concept like revenge itself is cool in concept, like Kill Bill is cool in concept. But that’s where its coolness ends. I understand reads of this film being a cathartic work, but even then the film is too heavy on the rape and too light on the revenge. Feminist readings get tangled in Jennifer’s coolness, her unbelievable emotional turnaround and psychological armor worn while seducing or bathing her once captors. Dennis Hopper and his wheezy gasmask may have been too much for my squeeze, but I’ve vowed to never make that same mistake again. With I Spit on Your Grave, the choice isn’t even fathomable. As the saying goes, Pawn Stars is always on somewhere.