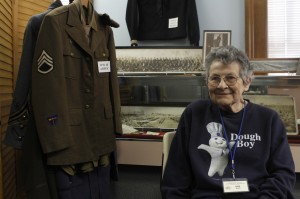 If you have ever made a trip down University Avenue, you have probably noticed the old, brick building with large gold lettering across the front reading “CATTLE BANK.” If that is not peculiar enough, what lies on the inside of these walls are even stranger: wreaths made of hair from the dead, authentic turn-of-the-century outfits, a harmonium, paintings of clowns and so many more oddities. This building dates back to 1857, making it the oldest documented building in Champaign. It is in unison with the neighboring Oakley Building, and together they make up the Champaign County Historical Museum.

Inside this old structure, one will find the co-president and treasurer of the museum, Sue Wood. This being my second time meeting Sue, I couldn’t help but notice this was also the second time I had seen her wearing a Pillsbury Doughboy shirt. A strange observation on my part, but I assumed she must have had some association with Pillsbury at some point in her life. On the contrary, she has worked in respected positions as an analytical chemist and in other science-related jobs. The Doughboy shirts are simply part of her mini-collection due to her fondness of the pokeable mascot. Not only does she currently hold two prestigious roles at the Champaign County Historical Museum, but she is also the University of Illinois’ very own chimesmaster. She has held this role for 42 years and can be found operating Altgeld Hall’s bells Monday through Friday.

Sue’s connection to Champaign dates back to 1966 when she came to the University to complete her graduate degree. Even though she has her Ph. D. in plant pathology and an extensive background in science, her interests have shifted from science to history. During the time Sue attended graduate school, she met her husband, Bruce, who was a graduate student in geography. Bruce has been affiliated with the museum for the past decade and got Sue involved in 2008 as treasurer on the board of trustees. It wasn’t until 2010 that Sue became co-president.

A work week for Sue at the museum involves taking care of finances, correspondences and welcoming guests. Within the museum, there are five exhibit rooms and a gift shop. The exhibits include the Victorian room, the grocery store room, the military room, the toy room and the ballroom/festivities room. All of the museum’s artifacts are from public donations. The only requirement for a display is a historical relevance to Champaign. The museum gets so many donated items that they could ultimately make an exhibit room covering any theme they wanted, Sue said. For now, though, the museum keeps two rooms permanent, two in rotation and a fifth one as a potential rotator.

Each exhibit has several displays with items unique to Champaign County. One of the most fascinating items I found is a display of wreaths made from the hair of the dead. These wreaths are in the Victorian room and were made to recognize and honor the deceased. This tradition’s origin is unknown to the museum, but they were made by collecting hair from hairbrushes and crocheting them onto wire. Another interesting find is a few of the original paintings done by Louise Woodroofe, who was a Champaign native born in 1892. She studied at the University, and was later hired to tour with the Ringling Bros. and do paintings of the circus. The museum’s toy room features one of her original clown paintings, which contributes to the almost eerie atmosphere of the room, which is peppered with several turn-of-the-century dolls and other strange paintings and toys.

In a seemingly quiet and low-key city, it is truly an amazement to get an in-depth look at the roots of Champaign. With tons and tons of donated artifacts like uniforms, handmade dresses, paintings, quilts, guns, medals and other trinkets, visitors can slowly unpeel the unique and fascinating history of Champaign.