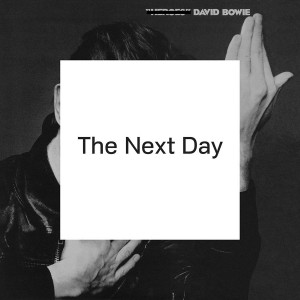 Used with permission by ISO Records

Album: The Next Day (ISO)

I feel as if I should have the phrase “artists grow old and lose their luster, so I wasn’t expecting much” digitally programmed as an excuse when defending the latest albums of aging musicians. It seems that, once an artist hits his point-of-no-return record, every following album becomes something forced, something lazy, and largely something leaving more to be desired. Thankfully, David Bowie seems more than confident to scoff at this dilemma and light a fire under it in the process. His first studio album in nearly 10 years, The Next Day isn’t just Bowie sluggishly sharpening already dull fangs and tossing out another Heathen. This is Bowie bearing the gusto that created Ziggy and the White Duke without falling victim to over-pretentiousness, releasing The Next Day as an honest-to-goodness rock record that understands its own mortality.
The record’s title track cuts immediately to the chase with refreshing familiarity that anyone should expect from a traditional Bowie opening. Though, rather than an overarching and robust boom of an introduction, “The Next Day” is a relatively minimalist footstomp track that stands alongside the ranks of a cut-in-half “Diamond Dogs.” The album’s opener features Bowie as an unrelenting force defiantly declaring “Here I am, not quite dying,” and no other lyric could be more appropriate for The Next Day’s sheer vigor and enthusiasm.
Like a bombshell left ready to ignite for years, the record barely stalls in delivering on its own brand of Bowie eclecticism. “Dirty Boys” rightfully belongs on ‘75’s Young Americans with its jazzy soulfulness and the bombastic saxophone that breathed life into other classics such as ,em>Diamond Dogs and Aladdin Sane. “The Stars (Are Out Tonight)” masters its poppy-single designation much more effectively than early January’s “Where Are We Now?” While the latter is a “Space Oddity” marvel in its own right that tells a story from the perspective of an aging Bowie, the former’s hybridity of past and present incarnations of the musician’s legacy leads to one of his most addictive choruses in almost a decade.
Even in the midst of less outspoken but equally expressive tracks like “Love is Lost,” The Next Day greatly concerns itself with never keeping on the same suit for more than one song, an ironically consistent tradition of Bowie’s that remains die-hard. For this reason, “Valentine’s Day” softens up the album’s sweet spot for 70s glam rock romanticism, and “If You Can See Me “springs right out of the last of Bowie’s Berlin Era with ‘79’s Lodger.
After the first seven tracks, however, the album’s high seems to subdue itself a few notches, and this oddly enough begins with “I’d Rather Be High.” While the tracks that compose the second half of the album are far from being lackluster and deprived of inspiration, they don’t seem to have the same immediate timelessness that the opening tracks provide. With the exception of the solid 80s-Bowie “Dancing out in Space” acting as a conveniently placed roadblock, songs such as “Boss of Me” and “How Does the Grass Grow?” settle for great rather than exceptional.
The record still finishes impeccably strong with the bat still swinging away in Bowie’s hand. “(You Will) Set the World on Fire” harkens back to both the title track and ‘80’s Scary Monsters… with a campy gospel-esque choir accompanying a harder rock Bowie. When the album concludes with “You Feel So Lonely You Could Die” and “Heat” almost synonymously it seems, The Next Day fades out with all the contorted intensity of the last of Bowie’s glam and the beginnings of his foray into art rock. If it weren’t for Bowie’s eerily haunting vocals meant to chill, “Heat” would feel right at home as one of Low’s instrumentals.
The Next Day’s most imperative strengths lie in both its unwillingness to simply be another Bowie album as well as its intelligent assimilation of every musical nuance that has carried the musician since the conception of his career decades ago. Neither a comeback nor a return to form (because he never left in the first place), Bowie’s newest album renders the “well, all artists degrade with age” excuse for creative mediocrity and laziness invalid.

Stream The Next Day in its entirety here.