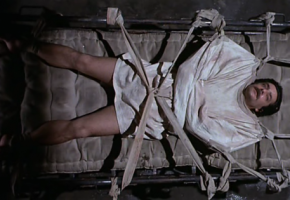 The first woman to receive the unique distinction of being nominated for the Academy Award as Best Director goes to Italian filmmaker Lina Wertmuller, whose 1976 gem Seven Beauties received a total of four Oscar nominations (for best foreign language picture), including a second for Wertmuller as best original screenplay. The film is best described as a satiric World War II drama about an Italian soldier/deserter and the desperate measures he chooses to survive his wartime ordeals. Famed New Yorker magazine film critic Pauline Kael dubbed the film a “slapstick tragedy”.

Wertmuller was one of the most popular foreign directors to hit the international cinema scene in the early 1970s with a series of enormously entertaining social political comedies that explored the conflict between the sexes and the old traditional and modern ways of living in Italy. These included Love and Anarchy, The Seduction of Mimi, and Swept Away. Each of these films featured her favorite star and Italian everyman, Giancarlo Giannini (who younger viewers will remember as 007’s older partner, Mathis in Casino Royale and Quantum of Solace), a tremendously expressive actor whose face could portray a myriad of feelings without saying much; but frequently his characters delivered endless diatribes with staccato comic timing and skillful charm.

Wertmuller apprenticed with Federico Fellini in the early 1960s and Seven Beauties contains an interesting, somewhat familiar blend of Fellini’s stylistic mixture of expressive acting and a lively musical score and a bit of Sergio Leone’s flair for extreme close ups contrasted with wide panoramic views of intriguing locales. Wertmuller’s story is a complex blend of humor and social commentary, but not always the most deeply profound. Told mostly in a series of flashbacks, Giannini plays Pasqualino “Seven Beauties” Frafusco, a deserting soldier and a former small time Naples thug, who was imprisoned when he bumps off his eldest sister’s pimp and through manipulations gets a reduced sentence if he agrees to enlist in the struggling Italian fascist army in the waning days of Benito Mussolini’s regime.

Pasqualino’s saga takes him from behind German lines where he witnesses mass shootings of innocent war victims, to a concentration camp where he seduces a morbidly obese female commandant among many other wartime atrocities, which Wertmuller handles with a dark sense of humor and the flamboyant gusto as the ever expressive Giannini who bugs his eyes and twists his facial expressions with the skill of the finest silent film stars. All that Pasqualino wishes is to return to his hometown and resume his role as protector of his elderly mother and his seven sisters who work in their family’s mattress factory. Giannini also honored with a best actor Oscar nomination for his role.

Whether you think the film is overly funny or darkly cynical, Seven Beauties will forever be remembered for Wertmuller’s comedic touch and her distinction of being the first of her gender to be honored by the Motion Picture Academy.