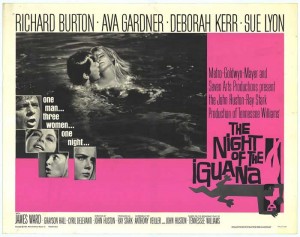 Many of playwright Tennessee Williams’ works were adapted to the big screen in the 1950s and ‘60s with great success. They offered rich characters for many actors to portray with passionate performances. While A Streetcar Named Desire, Cat on a Hot Tin Roof, The Rose Tattoo and others were more popular, John Huston’s 1964 hidden gem adaptation of Night of the Iguana is almost overlooked. Where censorship restrictions greatly diminished and changed the true nature of characters from those more successful adaptations noted above, Night of the Iguana is rather faithful to Williams’ original play and features four incredible performances by Richard Burton, Ava Gardner, Deborah Kerr and Grayson Hall.

Night of the Iguana concerns a defrocked minister, T. Lawrence Shannon (Burton), who is at the end of his emotional and spiritual rope. He’s gotten into trouble for an uncontrolled libido, a passion for especially young women and the sins of drink. He is now surviving as a tour guide for a cheap Texas company and is leading a group of a dozen elderly women on a Mexican bus tour of Puerto Vallarta. Shot in a stark black and white realistic fashion, Huston and co-screenwriter Anthony Veiller create an exotic view of a near tropical Mexico where other lost souls are seeking some sort of escape or redemption.

When Shannon detours the tour bus to a quaint hillside hotel run by her widowed friend Maxine Faulk (Gardner), Miss Fellowes (Hall) demands the group stick to its itinerary. Fellowes is also suspicious of Shannon’s attention to a young Miss Charlotte Goodall (Sue Lyon), a flirtatious teen who finds him fascinating and handsomely appealing. Within hours, another vacationer arrives with her elderly grandfather. Hannah Jelkes (Kerr) is a middle-aged spinster artist from Nantucket and her granddad is a near-senile poet who rambles the lines of a poem. Within one day or so, Shannon is going to open his soul to Charlotte, Maxine and Hannah before he faces a significant realization in his troubled life.

Burton and Kerr are in peak form playing vividly complex and repressed characters. But it’s Ava Gardner who nearly steals the show with her earthy, sexy performance as Maxine. As a recent widow, she’s lost a partner who was an admired pal, an impotent man who didn’t mind her passion for drink and a pair of Mexican beach boys. Maxine has had a thing for Shannon, and becomes noticeably jealous when Shannon takes interest in Jelkes’ troubles. Huston translates many of Williams’ sexual themes (promiscuity, infidelity and homosexuality) with mature frankness and even makes a captured iguana a haunting symbol of the troubled souls who converge in this quaint Mexican hotel.

Despite the film being promoted mostly as a steamy melodrama which featured the ad tagline, “One Man…Three Women…One Night…” Night of the Iguana went on to be nominated for four Oscars, including Gabriel Figueroa’s cinematography, Hall’s best supporting actress, best art direction/set decoration and best costume design (which it won). Huston would return to exotic Mexico in his 1984 classic Under the Volcano with equal narrative passion and visual brilliance.