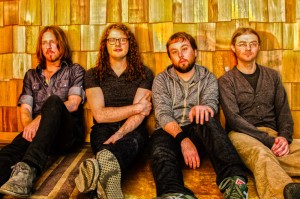 Used with permission from Elsinore.

Bud Light Summer Stage (formerly Center City Summer Stage), presented by the Champaign Center Partnership, is back this year to bring local music to the part of CU that lacks it the most: Campustown.

Although much of the music scene here revolves around downtown Champaign, which is just a quick bus ride away, or in the basements of off-campus houses, which are easy to find if you know where to look, this Summer Stage event brings it right to campus this Saturday. It is easily accessible for students who might not have yet gotten a chance to be a part of our lively and ever-growing music scene.

Take Elsinore for example, a local band that is truly on the rise. They’ve been long-loved by the CU community, but they hope to continue to grow and share their music with a bigger audience. In the past year, they’ve been working hard doing just that.

In an utter whirlwind of events, the band was approached by Beau Sorenson, a producer who has worked with Death Cab for Cutie as well as on Bob Mould’s latest record, wanting to procuce for them.

The songs were written, Champaign’s Pogo Studio was booked for two weeks, Sorenson was set to fly in from Portland and just five days before Elsinore was to record their new album, they lost a drummer and bassist.

Luckily, frontman Ryan Groff and keyboardist Mark Woolwine both knew exactly who they wanted to play the drums and bass.

“We realized that there was one drummer and one bass player that made sense for the band,” Groff said. That was Brad Threlkeld on the bass and Dirty Feathers drummer James Treichler.

“They both were in a position to say yes and were excited, flattered and really, really humbled by us asking them,” Groff said.

Everything came together, and according to Groff, things went even better than they would have with the old lineup.

“In terms of chemistry, we’re happier together,” he said. “With the old band, we were always trying to figure out how to be friends and how to be in the band together, and that’s just too much thinking about things that are not making music. With the new guys, we’re all just excited to be playing with each other.”

After a recent tour and series of CU shows, Elsinore plans to shoot some music videos and find album artwork for their new release, which comes out in October.

Groff described the album as a ”two-level upgrade” from the band’s previous material, due to Sorenson’s wealth of recording knowledge.

“It sounds more true … like a focused work of art,” said Groff, whose adorable son, Oliver, was born right before the album was recorded.

After a bit of touring and a few local shows, the band has gelled nicely. If you somehow missed them at Cowboy Monkey or The Velvet Elvis, Bud Light Summer Stage would be a great chance to catch the new lineup and new songs.

“We finally got to know what it’s like to play on stage with each other,” Groff said. “All the shows went really well, and we had a positive discovery upon playing together.”

While Elsinore might be the most active CU band as of right now, let’s not forget the rest of the all-star lineup of local bands playing the outdoor fest, including Dirty Feathers, The Struggle (featuring Harsh, Swords and Jay Moses), Sun Stereo and the Feudin’ Hillbillys, who will play two sets on a second stage added this year.

There will be rap by way of up and coming Heirship rapper Jay Moses, funky jams by way of Sun Stereo — an Urbana band fresh off their Summer Camp performance — and a little bit of country, courtesy of the Feudin’ Hillbillys. Whether you’re a Champaign-Urbana native, or a student who has never ventured far from campus, the central Green Street location of this show makes it easily accessible, and the lineup is everything you want in a street festival, with a CU spin.