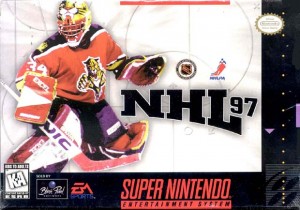 In honor of the 2013 Stanley Cup Final between the Chicago Blackhawks and the Boston Bruins, we simulated the seven-game series using NHL ’97 on a Super Nintendo game system. The rosters are completely different from both teams’ current rosters and there are many real-life factors that contribute to a playoff series that can’t be recreated in a video game. However, if the 1996-97 Blackhawks and Bruins met in a Stanley Cup Final — two teams with Hall of Famers such as Eddie Belfour, Adam Oates, Ray Bourque, Cam Neely and Denis Savard — this is how our experiment with NHL ’97 sees the series playing out:

The Bruins jumped out to an early 2-0 lead in the first period, but with two minutes left in the third, Chicago’s Tony Amonte put two power play goals past Boston goaltender Bill Ranford to tie the game at 2-2.

The goals came on a 5-on-3 and a 5-on-4 power plays and were netted within 30 seconds of each other.

Game one continued for a grueling five overtime periods, but was finally ended when defenseman Jon Rohloff scored the game winning goal on Eddie Belfour with under a minute left in the fifth overtime. Boston takes a 1-0 series lead.

Without Tony Amonte (injured early in the game), the Blackhawks trounced the Bruins 3-0 to even the series at one game apiece. Sergei Krivokrasov had two goals, while Bernie Nichols added a third.

Belfour’s shut-out was his first of the series and came with ease, as the series headed to Boston for game three.

A lack of offense was the biggest story of game three.

The game looked to be over when the Bruins’ Ray Bourque had an empty net in the first overtime, but his shot rang off the post.

Neither team had yet to score a goal late into the second overtime, when Bruins defenseman Alexei Kasatonov ended the game with a breakaway goal on what seemed to be an impossible-to-beat Eddie Belfour — a goalie who had 13 shut-out periods thus far in the series.

Kasatonov’s goal gave Boston the victory and a 2-1 series lead over Chicago.

A dramatic goal by Chicago’s Cam Russell with nine seconds left in the game evened the series at two games each.

It was another game poised to head into overtime when the Blackhawks began a late-game push in the Boston zone.

With 31 seconds left, a Chicago shot rang off the post and nearly gave the Blackhawks a sure victory, but instead flew back into their defensive zone. Russell aggressively brought the puck back into the Boston zone and put the game winner past Ranford, avoiding overtime and another chance for the Bruins to grab a commanding 3-1 series lead.

An early injury to Chicago defenseman Chris Chelios in the first period proved to favor Boston near the end of game five.

Chicago struck first, taking advantage of a mix-up in the Boston defense, allowing Eric Daze to put in an easy empty-net goal.

But both teams’ defenses seemed flustered in the second, as a short-handed Boston team tied the game on a Dave Reid goal when Belfour gave away the puck in front of the net.

The Blackhawks recaptured the lead late in the second on another defensive mistake by Boston, this time allowing Murray Craven to put a power play goal in an open net.

The 2-1 Chicago lead didn’t stand for long in the third, when Boston came out firing, scoring three quick goals (Kasatonov, Donato and Bourque) and cementing a game five win.

The Bruins’ victory gave the team a 3-2 series advantage and had Boston looking to lift the Cup on their home ice.

With their backs against the wall, Chicago went into Boston and took game six, 4-1.

Chicago scored two goals within the first two minutes of the game, when Jeremy Roenick and Joe Murphy both put breakaway goals into the net on questionable goaltender interference calls.

The only goal the Bruins were able to grab was one that Chicago put into their own net, in the second period.

Chicago’s goal that put Boston away, 3-1, was a moonbeam by Cam Russell that came from outside of the blue line and blew by Ranford.

Tony Amonte put an exclamation point on the victory, adding a late goal in the third, giving Chicago even more momentum as they returned home for game seven.

Chicago’s game-tying goal in the final seconds of the third period was not counted, as the clock expired before the puck slid across the goal line, allowing Boston to barely escape Chicago with a memorable Stanley Cup victory.

It was a wild and unpredictable game from start to finish, but allowed for an exciting end to a fantastic series.

During the opening face-off, Boston center Adam Oates was credited with the game’s first goal when Chicago’s Jeremy Roenick deflected the puck drop straight back into his defensive end and past an unsuspecting Eddie Belfour.

But Roenick redeemed himself later on in the period, tying the game on a breakaway goal.

After a Boston shot rang off the post early in the second, Don Sweeney was able to put a rebound behind Belfour and gave the Bruins a 2-1 lead.

Later in the second, Chicago’s Eric Daze seemed to have a wide-open opportunity when Ranford’s sprawling stop not only saved a goal, but wound up saving Boston the game.

The Boston Bruins held onto their 2-1 lead and were crowned the 1996-97 Stanley Cup Champions.

Will the 2013 Stanley Cup Final be as crazy of a series as this one was? We doubt it. But maybe NHL ’97 knows something we don’t and Boston will take out Chicago in a dramatic seven games. But if it’s anything like our series played out, get ready for a lot of offside calls and penalties — with a Boston defense that has Brad Marchand and Zdeno Chara, this part will probably be true. We’re not saying that tonight’s game one will go into five overtimes, but hey, who knows what could happen?