Less than 24 hours after Renae’s reunion that took over day one of Dumb Fest at The Black Sheep Cafe, the festival continued on and never slowed pace.

Soap Scum began day two with one of the best sets of the weekend. The Springfield crowd was immediately enthralled as frontman Brian Galecki ran in circles, crawled between the audience’s legs and jumped off of amps, knocking them over while guitarist Mario Cannamela picked them back up and dove into them like bowling pins. Garbage began to fly through the air, but don’t worry, someone brought a broom into the chaos and decided to do some cleaning while they were at it. Oh, and Galecki ate some of it too.

Bailout was the first band to play on top of the half pipe in Skank Skates. “Skate or die!” singer Greg Clow yelled at the crowd and, skateboards or not, they did.

Running up and down the half-pipe, the crowd began a circle pit and never stopped until the band did. Clow’s wacky yet intense stage presence literally drove audience members up the walls of Skanks as they climbed without a hint of care.

Nearly everyone at the festival piled into Skanks to see Lumpy & the Dumpers play. The wildly entertaining Martin Meyer (Lumpy) is always a treat to see perform and the sizable crowd made it apparent that the word got out.

Entangled in light fixtures, sliding down skate ramps and draping himself in a Green Bay Packers poncho, Meyer injected his energy straight into every person inside Skanks. There are few things that are as great to witness as the crowd surrounding Meyer at the beginning of “Face the Meat” to chant along, “One of these days you’re gonna face the meat.” and then scatter like the embers of a firework after he screams, “1, 2, fuck you!”

Dino Bravo played a powerhouse of a set midway through day two, and if there was ever a competition for the loudest duo in punk rock, the band would surely hold gold over their heads just as the late-wrestling legend once did.

But no amount of noise could compare to Angry Gods’ set later in the evening. The Chicago band had the walls and floor of Skanks’ shaking as if an atom bomb had been perpetually going off right outside the door. The band consistently puts on a titanic show and features one of the largest walls of amps you will ever see at a DIY show. Imagine what Satan’s alarm clock would sound like and you might get close to experiencing their set at Dumb Fest.

Boilerman’s arrival was delayed after the band was involved in a dangerous highway accident on their way to Springfield. A van driving the opposite direction flipped over the median, causing them to swerve out of the way and damaging both passenger-side tires. Forced to wait for a tow and a rental car, Boilerman still showed up to Dumb Fest and put on a solid set. But to throw more salt in the wound, their bass broke after two songs.

It was an odd and eventful day in Springfield, including a moment when the power even briefly went out during Say Something’s set early on. “This is a natural break in the song, actually,” one member joked.

Thankfully the power stayed on for Technicolor Teeth’s set that followed soon after, because the three-piece band put on an incredible showing of catchy yet spacey melodies that had all members of the band joining in.

Champaign hardcore group Need’s brutally intense set ended with bassist Aaron Shults sliding off the top of the half-pipe while unplugging his instrument in perfect time, making it the most entertaining ending to a set at the two-day fest. 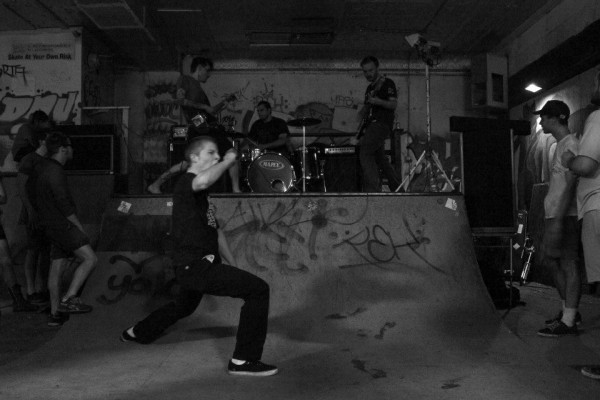 Shaved Women front man Ben Salyers produced memorable stage banter in between songs, including the line, “All human beings are inherently useless,” while bassist John Birkner spent most of the band’s set trying to catch cheese balls in his mouth that were being thrown from the audience. And he never missed a note.

Our Lady put on an emotion-filled performance that had drummer Kyle Ratliff spending more time on his feet, yelling along with guitarist/singer Tim Williams, than he did sitting and playing drums. It was an odd set though, as despite the depressing atmosphere that the band’s new songs bring along, the younger crowd continued to form circle pits and bounced off each other to the slow-tempo tunes, making it seem as if they were looking more for an excuse to run around and mosh rather than witness the show in front of them.

The night ended with a short set from Tenement that left the crowd hoping for more of guitarist Amos Pitsch’s talented maneuvering on the instrument, after he exploded into a showcase of improvised solos that had everyone’s heads spinning.

All in all, Dumb Fest was an incredible success in its first year running. The guys at The Black Sheep Cafe in Springfield are no strangers to putting on fantastic shows, but Dumb Fest was something beyond their usual gift to the DIY community. The instantly popular, safe and entertaining festival will be one to watch quickly grow in the coming years.