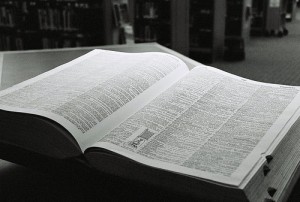 Used with permission from Creative Commons and greeblie

English is a pretty weird language. It has influences from all over in its grammar and vocabulary. Much of what once made logical sense has changed over time to make English one of the most difficult languages to pick up as a non-native speaker. But we do have some words you may not know that possess the simple beauty of meaning exactly what they sound like.

One of my favorites is the word slubberdegullion. It rolls wonderfully off the tongue, and its definition fits it to a tee. A slubberdegullion is a filthy, slobbering person.

Fans of Neil Gaiman and British television will already know that petrichor is the smell of dust after rain. But they might not know that gargalesis is the opposite of knismesis, with the former meaning heavy tickling and the latter meaning light tickling.

Similarly, an agelast would never engage in cachinnation or loud hysterical laughter. And a gongoozler or idle spectator who mentally undresses someone in an act of apodyposis would likely experience basorexia, the overwhelming urge to make out.

One whose bad aim causes them to fail in their attempt to defenestrate a heavy object, meaning to throw it out the window, might do damage to the interfenestration or the space between said windows.

More of these can be found at http://users.tinyonline.co.uk/gswithenbank/unuwords.htm Just keep in mind that anyone trying to use these fun words may suffer from a bit of hamartithia or is likely to make a mistake.