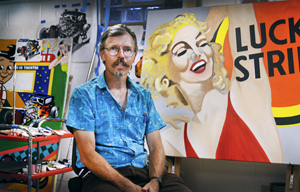 Brian J. Sullivan is a visual artist, pure and simple. Although he paints and sculpts, he prefers not to be categorized. On his website, he writes, “I do not limit myself to working in any one media, but rather use that media which I believe will best get my message across.”

With artwork showings across the nation and in multiple countries and his own Champaign studio, this local artist’s work is limitless.

“I can and have worked in lots of other mediums (than painting),” he said. “Whatever I do, I do as an art form. In other words, when I’m making a cabinet or working with my hands and building something, I look at it in a different way than other people do. I don’t mean that I make a cabinet as art, but I have the sensibilities (of an artist).”

He’s done construction work to pay bills, and would use the same artistic sensibilities building a porch deck as he would on a painting.

He spends the majority of his time now on large paintings featuring graphics and logos from 1950s advertisements and graphics, which he calls “the golden age of advertising.” Multiple pictures of signs and logos combine to form one of Sullivan’s paintings. 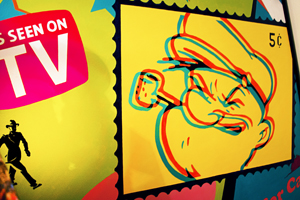 “I try to put them all together to make a new composition and put things together that you generally wouldn’t see together so that it makes you question what your original preconceived ideas are about ‘Lucky Strike’ or ‘Big Boy,’” Sullivan said, “because that’s what the advertising media has beat into your head all these years. Now I put it in a new context and it might be more suggestive or provocative.”

“I try to find things that are well published,” he said. “I don’t want to make them up myself. I’ll always use things you’ve seen before.”

“Texaco Pussycat” is an example of a name Sullivan would bestow on a painting. He names his work based on the most striking details present, in this case a large Texaco logo and a small portrait of a kitten below Marilyn Monroe’s face, among other details such as dangling shoes and an Elvis Presley logo.

“One woman looked at this and spent almost an hour telling me the symbolism she saw with the shoes, and Elvis, and she just went on and on,” Sullivan said. “I love hearing that because I never tell them ahead of time. They just see the painting and they get it. They know what these things meant to them and they tell me.”

What satisfies Sullivan most about his work is the viewer’s interpretation. 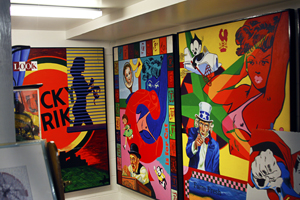 “I just want everyone to have their own experiences. That means that each time they look at the work, they’ll see different things they haven’t seen before and they’ll discover new things. Whereas if I just did a pretty little landscape they’d see it once and get it and never be interested in it again,” he said. “I’m trying to make art that makes people think and it says something and it touches something in them. I’m not concerned or constrained by trying to make sales since I get my income from other ways.”

He makes ends meet by renting a few properties in the community, which allows him to devote his efforts to the authenticity of his art as an artist and not a salesman.

Sullivan will reuse different logos multiple times, but no painting of his is the same, and he doesn’t plan them in advance or sketch anything beforehand. A large painting of a giant “Lucky Strike” logo next to Marilyn Monroe (called “Lucky Strike With Lady”) still has a few blank spaces he’s working on filling with more logos.

He will be going to Des Moines in a couple weeks to the Iowa Gas Swap Meet, an event for collectors of “oil and gas petroliana and auto advertising,” according to their website. He’s not only going to display and sell his work, however.

“A lot of places I go to, I use to get new images,” he said. “I’ll be able to find old icons, logos, graphics of old cars, old oil cans, old gas signs that I can take pictures of to use in my future work. A lot of times when I go to a show, it’s not just to sell, but a trip to gather more reference material.”

Sullivan is an artist who values the integrity of his work, and not its potential sale price. He’s been working with this in mind for over 30 years in Champaign-Urbana and shows no signs of stopping anytime soon.

For more information and examples of Sullivan’s work, head to briansullivanart.com.