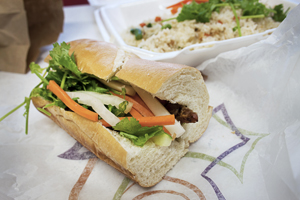 Johnstown Square in Champaign is a tiny mecca of Campustown living, cramming in a general store, T-shirt shop and a handful of eateries between Fifth and Sixth streets along John Street. Amid the cacophony of stores lies Asian Taste, a fast food Vietnamese takeout place that has taken over the intriguing, but misguided, Doodles restaurant that had attempted to defy the five-cents-per-package persona of ramen eating.

Unfortunately, other than a brightly colored orange sign cheerfully set up in front of Insomnia Cookies, there is no other marker to announce Asian Taste’s presence, which is a shame because it has the potential to satisfy hungry students and community members alike. It’s cheap, approachable and markedly different from the Chinese and Korean restaurants that monopolize the Sixth and John street block around the corner.

Not much has changed,layout-wise from the location’s Doodles days. There are three booths, a five-top counter running alongside the back wall, a station stuffed with napkins, utensils, sauces and a refrigerator selling appropriately Asian drinks. Their menu of soups, pho, sandwiches and snacks is sporadically available at most times. Your best bet would be to peruse the whiteboard that announces the day’s specials.

They definitely do not skimp on the basil. The spring rolls are basically thin tubes of rice paper wrapped around giant leaves of basil and garnished with thin slices of shrimp, chicken or pork. I wasn’t a huge fan of them, but the accompanying chili-peanut-soy-sauce dipping sauce was phenomenal. 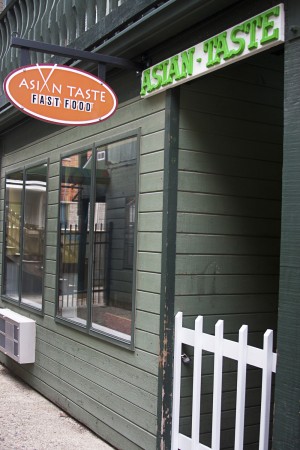 They also offer pho on the menu, which was the real reason I wanted to try out this place. I’m not a fan of the greasy, overly spiced, brown-soup version of pho (the likes of which can be found and enjoyed at Golden Wok). Other than Bangkok Thai/Pho 911’s clear-soup offering, no other Asian restaurant in the area really satisfies my particular pho craving. Until now. For around $7, you get an enormous bowl of noodles that will fill you up and keep you happy for the next day or so.

But the star of the eatery, by far, is the banh mi sandwich, which is delectable. Banh mi thit nuong, or Vietnamese baguette and grilled meat sandwiches, have exploded in popularity in the past few years. “Banh mi” actually means “bread” in Vietnamese, and has evolved from its colonial French roots into its most recent iteration, made out of both rice and wheat flour. What do you get when you order a banh mi sandwich? A soft baguette, baked until crackly-crisp on the outside, filled with either barbecue pork, cold cuts of ham or liver pate, then topped high with mayonnaise, pickled carrots, pickled daikon, jalapeño, cucumber and cilantro. The combination sandwich — filled with all three kinds of meat, then topped with their homemade mayonnaise, sliced cucumber, sliced jalapeños, julienned carrots and an almost exorbitant amount of fresh cilantro sprigs — is possibly one of the greatest sandwiches I’ve had to date.

Be sure to try out their Vietnamese iced coffee: a cup, brimming with ice cubes, half-filled with coffee concentrate, then topped off with sweetened condensed milk. Sweet doesn’t even begin to describe it, but it’s a nice rush of caffeine to end the meal.

You can find Asian Taste at the old Doodles location, 502 E. John St.