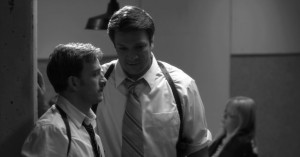 Used with permission from Bellwether Pictures.

Claudio (Fran Kranz) rises up solemnly from the pool, his face covered by snorkeling gear. Don John (Sean Maher) and Conrade (Riki Lindhome) slither up from the water like the evil eels from The Little Mermaid to whisper in Claudio’s ear. They tell him that Don Pedro (Reed Diamond) has not been trying to convince the beautiful Hero (Jillian Morgese) to marry Claudio, but in fact Don Pedro has been endearing himself into Hero’s favour. Claudio angrily storms off.

This scene from Joss Whedon’s adaptation of Shakespeare’s Much Ado About Nothing (2013) exemplifies everything that is perfect with the film: a balance between the comedy (a man befitted in a ridiculous snorkeling getup in a pool, the villains creepily appearing out of the water beside him) with the drama (Don John trying to further his plan to mess up Claudio’s hopes for marriage). Much Ado About Nothing follows the events and romantic plots that occur in Leonato’s (Clark Gregg) home when Don Pedro and his esteemed guests come to visit. As an authentic romance springs between Claudio and Hero, situations quickly grow complex as a result of Don John’s machinations and as the non-eel-like characters conspire to have Beatrice and Benedick fall in love.

Joss Whedon worked the same magic on Much Ado About Nothing as he did with The Avengers in that he took something that was already established and brought his stylistic wit and vision to it. While the dialogue is mostly unchanged from Shakespeare’s play, those who feel like they’d fall behind with the Shakespearean dialogue can keep up with the story based on the actors delivery of lines. Another way that viewers can stay along is through the action. Whedon modernized Much Ado About Nothing, allowing for cars, cell phones, pool parties and iPods. The ways in which Whedon adapts it brings a sense of fun and fey delight to party scenes, with acrobatic tricks set to a song in the original play, modernized and ethereally sung by Maurissa Tancharoen and Whedon’s brother, Jed.

This is not the first time Whedon has collaborated with his brother. In fact, most of the cast in Much Ado About Nothing is like a “best hits reunion” of actors from Whedon’s popular television series and films. Perhaps the most delightful pairing is Nathan Fillion and Tom Lenk as Dogberry and Verges, two well-intentioned but dimwitted police officers. They play the token fools in the film, and though their roles are small, they execute their comedy scenes with adorable camaraderie and lines that deliver some great laughs.

While the film does provide enough laughs and drama, there are a few places in which the film could have been stronger. While the cast worked together well and had a good chemistry, the acting may have gone a bit overboard at times, especially the physical comedy which verged slightly towards slapstick and heavy-handed. Alexis Denisof in particular seemed to go a bit overboard in the scenes where he exemplified how foolishly enamored Benedick is with Beatrice, his voice taking on a weird purring tone. I also wasn’t too sure what Beatrice’s excessive drinking throughout the film was meant to imply. It seemed as if Beatrice rarely went through a scene without pouring herself a drink. I half expected the drama at the end to be an intervention. This isn’t to say that everyone else wasn’t having their fair share of the sauce, and it may even have been a cultural nod toward the casual way wine was consumed in olden times, but when so many things are updated, it didn’t seem particularly necessary. Whatever the motivations behind it, the massive alcohol consumption and overacting proved distracting enough for me to notice, but not come close to letting it ruin the great parts of the film.

The film subtly posits a question to the audience: Can something old and academic like Shakespeare still be entertaining and relevant today? The film was limited in it’s release, and will have left The Art Theater by Aug. 2, so really, only those with a desire to go seek out a Shakespeare will go see it. Regardless, for those who see it, it shows that these stories are timeless. You could set them on stage at the Globe Theatre in London centuries ago, you can film it in Joss Whedon’s house in 12 days and it will still inspire the same laughs, the same sighs, the same urge to root for a rom-com happy ending. Whether it’s a guy in a snorkel or a guy with a scabbard at his waist, whether it’s put on by William Shakespeare or Joss Whedon, Much Ado About Nothing is a story that can touch all audiences.