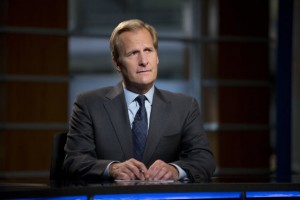 Used with permission from HBO.

The Newsroom returned for its second season Sunday, July 13, on HBO and fans may have noticed some distinct changes from season one. The Newsroom follows news anchor Will McAvoy (Jeff Daniels), who tries to change his program into one that focuses on facts instead of being generally amiable. The first season got a lot of criticism, and some changes to the show its sophomore season seem to come in direct response to them.

The first notable difference in the new season is the change in the opening credits. Opening credits can reveal a number of things about a show: the feel they’re going for, where the focus of the show is and the characters that we should care about. Last season’s credits had old photos and footage of news anchors and the behind the scenes of making the news intercut with images of the characters working. Those credits showed the making of the news, the process behind it, with the aspirational figures (Cronkite notably among them) interspersed, giving viewers everything they needed to know about where the heart of the show lies. To my immense dismay, the credits changed for season two. Gone are the nostalgic images of news anchors and people hard at work. Instead, confusingly, the new credits have the inspiring song set at a faster tempo, it has replaced most images of the cast with shots of New York and people’s hands holding markers as they highlight things and wires being pulled. What may unnerve the critics who consider the show sexist is that one of the shots in the new opening credits is of a woman’s feet in high heels as she falls backwards and spills coffee all over a piece of paper. If the season one credits were supposed to show that a trustworthy news anchor was to be found in the following hour, season two’s surely promise that women will continue to be clumsy.

The sexist depiction of women was a major criticism for season one. In Mindy Kaling’s book Is Everyone Hanging Out Without Me, and Other Concerns, she talks about the types of flaws women have in romantic comedies. Rather than giving them actual human flaws, or — God forbid! — make them even slightly average looking, they are made clumsy. It seems that Aaron Sorkin takes that approach on writing female characters in Newsroom. People cite the scenes where women trip, knock things over, don’t know how to use email and fumblingly slam men in the face with glass doors as sexism in Sorkin’s portrayal. The sexism may have seemed a bit baffling to fans of Sorkin’s acclaimed show The West Wing, where characters like C.J. (Allison Janney) and first lady Abbey Bartlet (Stockard Channing) could manage to be both strong and female.

This is not to say that all women in Sorkin’s Newsroom are portrayed as meek all the time. I contend that though their depiction is flawed, the women are still strong figures. In fact, one of my favourite scenes from the first season is when Charlie (Sam Waterston) berates Sloan Sabbith (Olivia Munn) for going rogue in an interview. In the heat of their argument he shouts at her, “Don’t front off with me, girl.” Instead of submissively backing down, Sabbith stands firm and retorts, “Don’t call me ‘girl,’ sir.” Unfortunately, the sexist statements from Charlie do not stop, as is exhibited in the first episode in season two, where he refers to Sloan as “money skirt,” but she remains capable of fending off such remarks while remaining professional and admirable.

At the beginning of the latest episode, viewers also get to see a distinct change in Maggie (Allison Pill), who, as the lawyer in the episode aptly noted, looks like, “The Girl with the Dragon Tattoo.” Will glosses over this change, but we can gather that an event that shook up Maggie’s life has made her ‘hardcore’ and edgy, but I’m not sure they’ll be able to pull it off.

The Maggie sequence came during one of the new changes I disliked the most so far this season. People complained that season one made reporting the news too easy for Will and his team because Sorkin used real stories and had the benefit of hindsight to have his characters make the right decisions and come up with thoughtful responses. Perhaps to appease these complaints, Sorkin added a fictional news story that the team botched. Despite hating when seasons open showing a bad situation and then spend the rest of the season revealing how they got there, I love the show, and will begrudgingly sit through it.

Many of the changes this season seem reactionary from the criticism it received in season one. Of the changes so far, they aren’t the best, but they have time to pan out into something more worthwhile.