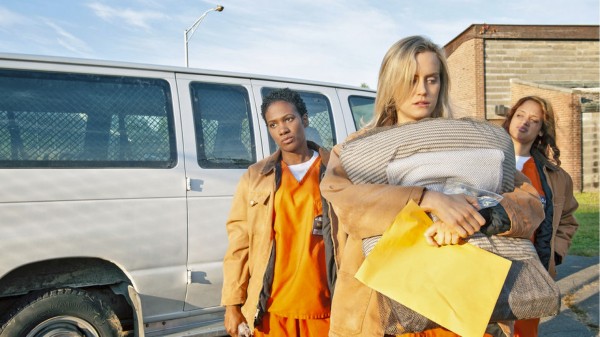 Used with permission from Netflix

A number of new shows have recently made their way to Netflix, amongst them, the Netflix “original” series (adapted from Piper Kerman’s memoir by the same title) Orange is the New Black, and Sundance Channel’s New Zealand-based mini-series Top of the Lake. Both shows, though dissimilar in many respects, focus on complex female protagonists, and are addictive to watch.

Orange is the New Black

Basic Premise: Piper Chapman (Taylor Schilling) gets busted for a drug operation she helped her girlfriend with ten years ago. She now must survive fifteen months in Litchfield Federal Prison with her fellow inmates and the sexist, oppressive prison guards and counselors, all while trying to maintain her relationship with her male fiance, Larry (Jason Biggs).

Why You Should Watch: This show does for prison what Mad Men did for the sixties. It brings a sense of authenticity of the living conditions, the daily abuses and realities of prison life, with a cast of largely unknown actresses who bring depth and life to their roles. You get to focus on Piper’s struggles, but you also get to delve into the backgrounds of other characters. Through these flashbacks, you not only get to see how the characters got there, but they deepen, changing from stock “types” into engaging, complex characters. The best example is with the cook, “Red” (Kate Mulgrew) who puts on a tough exterior and reigns with an iron fist over the kitchen. Her character is given more depth as the season unfolds, and the audience gains access to her and grows to understand her motivations and how she grew to become who she is. Another such character is “Crazy Eyes” Susan (Uzo Aduba), who appears to be lower class, stereotypical, insane woman with a crush on Piper. She too gets a rich background with a surprising twist of highly educated parents and a background in dramatic acting with high diction. Such little surprises, as well as the interactions between the characters makes watching it a delight.

It displays some of the tense realities: the traumas of solitary confinement, the difficulties assimilating to life outside prison, the abuses by the males in power, while splitting the story amongst the interesting situations.

Top of the Lake

Basic Premise: Detective Robin Griffin (Elizabeth Moss) returns home to the fictional town of Lake Top, New Zealand, where she must solve the case of a pregnant twelve year old, Tui Mitcham (Jacqueline Joe), who goes missing. Robin must work to solve Tui’s case while dealing with her own complicated history and the bizarre assortment of people who reside there, including the criminal Mitcham family, the group of women living in storage containers, and her cancer afflicted mother.

Why You Should Watch: While it’s got beautiful locations (it was filmed in New Zealand) that set the tone for the mystery and episodes packed with plenty of plot twists and new revelations, the real reason to watch is for the characters. You get a firm sense of who Robin is from the very first episode: a tough, driven, caring detective, but as the mini-series progresses, so much more of her backstory and motivations are revealed. This show has some of the most well drawn characters. All of the characters — with a few exceptions — seem entirely human; even the “villains”, while they aren’t exactly made likeable, have scenes that reveal some vulnerabilities or warmth. The best possible case is that of Tui’s father, Matt Mitcham (Peter Mullan), who spends most of his time doing morally reprehensible things, yet is not entirely without human sentiment. No one on the show is as simple as they appear, and nothing gets completely unwound until the last episode. Come for the mystery and the fun accents, stay for the characters.

This episode is good for seeing all the weird combinations of characters, especially with the oddball and ethereal GJ (Holly Hunter). It also builds on things that pan out over the rest of the show.