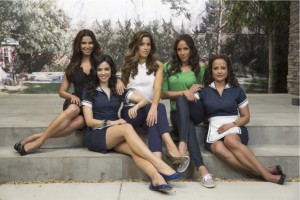 There is blood splattered on the walls, pooling into the carpet, the police pack up and are ready to leave. Evelyn (Rebecca Wisocky), who owns the mansion in which the bloody room resides, is horror struck by the police leaving. “My maid was just murdered!” she shouts at them, gesturing at the gored room. “Now who’s going to clean this all up?”

Quick exercise for you readers: think of your favorite TV show. Now think of the female lead in that show. Not the supporting characters, not your favorite character, the lead. If you weren’t thinking of The Mindy Project or Scandal, that character was likely white. I’m not saying that the creators of Mad Men, Grey’s Anatomy, and Nurse Jackie are raging racists out to destroy the self-esteem of minority women in the United States. I’m pointing out a statistic fact that when you turn on the TV, your protagonists are going to be within a certain age-range, a certain race, and look a certain way, because that’s the way it is, and that’s what you’re being told is important.

So I admit, I turned on Devious Maids because when I saw promos, I saw a TV show that featured four Latinas in the primary roles. Devious Maids follows the lives of housemaids to the filthy rich, Zoila (Judy Reyes) and her daughter Valentina (Edy Ganam), Rosie (Dania Ramirez), Carmen (Roselyn Sanchez), and Marisol (Ana Ortiz). The series opens with a murder of a maid in the mansion of the suspicious Powell couple. With a young bartender accused and awaiting trial, the case seems closed, until **MINOR SPOILER ALERT AHEAD** the boy’s mother, Marisol, goes undercover to try to solve the murder herself and spring her son from prison.

The show is more of an ensemble, splitting the time between the dramas in each household: Zoila’s daughter loves the wealthy boy they work for, Carmen wants to be a star, Rosie wants her son to come join her from Mexico, Marisol is trying to help her son, and, of course, we get the wild, vapid, and sinister lives of the people whose homes these women clean. While it is satire, the show has its real moments. Yes, the wealthy are going to be ridiculous and evil. Yes, the poor Mexican woman is going to call her boss, Spence (Grant Show) “Meester Spence.” But that does not take away from the moments that are the emotional core of the show: a woman trying to keep her daughter from dating someone she doesn’t approve of, an aspiring singer who is told that her accent is unlikeable, and she must make it more American sounding to become “marketable” (if you don’t believe this kind of stuff happens in real life, watch season three of America’s Next Top Model where the Southern contestant was told to take elocution lessons). It’s a show about people trying find their place in the United States, and tentatively figuring out how to carve a space for themselves in a society that tells them they are only good for cleaning.

This isn’t to say the show doesn’t have some problematic aspects in the depictions of Latinas. All the women but Carmen have children — two of them quite grown up children- — and they’re all fairly young women. There’s the troubling aspect of a love interest between a man who clearly has interest in the woman because of the simplicity and sweetness she offers, instead of seeing her as a complex individual. And the character who is likely supposed to be the center of the show, Marisol, is the most Americanized of the bunch. What does it say about the value of Latina women, if the central investigatory character is yet another woman speaking with an American accent, who comes from a highly educated background, and apparently has the funds and luxury to go undercover as a maid for months at a time?

Looking past the “race” issue of the show, I also worry about its sustainability. If the show revolves around solving this murder, I wonder how they’ll carry a season two? Mark Cherry, however, has a knack for both satire and stretching a series, so it’s quite likely there will be a season two, with a new mystery for the ladies who do the dirty laundry to uncover. And these ladies are worth watching.