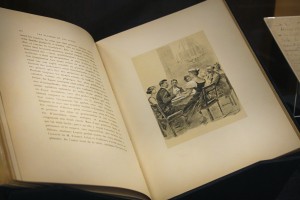 If there’s one thing all Marcel Proust scholars can agree on, it’s that the man sure wrote a lot. This month the Rare Book and Manuscript Library honors the influential French novelist with an exhibit featuring selections of the university’s Proust collection. The exhibit entitled “Marcel Proust: Writing Without End” marks the 100th anniversary of the publication of Swann’s Way, the first of a seven volume classic commonly known as Remembrance of Things Past.

With display cases arranged chronologically through the Rare Book and Manuscript Library, the exhibit emphasizes Proust’s transformation as a writer through different stages in his life. The first case begins with some of Proust’s earliest works published around 1892.

“Proust started writing very young,” said Caroline Szylowicz, curator of the exhibit and the Kolb-Proust librarian. “As a teenager in high school, he started writing little journals with his school pads.”

The exhibit transitions from these earlier works to Jean Santeuil, Proust’s first attempt at a novel. Published posthumously in 1952, the abandoned manuscript combines many of Proust’s shorter writings.

“Proust starts accumulating chapters, episodes that are very heavily autobiographical,” said Szylowicz. “Pretty much every incident in his life becomes a pretext for some section of the novel.”

Both the fragmented nature of the episodes and the lack of a clearly defined plot eventually causes Proust to abandon the project.

The exhibit moves from this moment of crisis to what Szylowicz describes as a “very intense moment of aesthetic and critical development.” After giving up on Jean Santeuil, Proust begins reading and translating the works of John Ruskin, an English art critic. According to Szylowicz, Proust’s scholarly work is not only a crucial critical development, but also a way to satisfy his family. As the son of bourgeois parents, Proust was expected to pursue a practical career in diplomacy or law.

“But Proust resists all of these attempts,” said Szylowicz. “He knows he wants to be a writer.”

Following the completion of his translations of Ruskin and the death of his parents in 1905, Proust returns to his literary pursuits with a more mature perspective. For the next few years, he works to cultivate his own unique narrative voice. Szylowicz notes that Proust writes a series of pastiches, or texts imitating other writer’s styles, in order to better understand exactly how to construct an author’s voice. Through his uncanny ability to imitate other French authors, Proust is able to figure out what makes a style work and how to create his own.

“By 1908, Proust’s ready to embark on what will become his project for the rest of his life,” says Szylowicz.

Yet Szylowicz is quick to point out that Proust had no idea exactly what he is beginning. He planned to write a series of small projects: an essay on the literary form of the novel, an essay on homosexuality and a love story involving jealousy. However, in the next few years, these separate pieces begin to merge into one masterpiece, Remembrance of Things Past.

“You watch Proust go through all these works of reflection on what style is, what literature is, what art is and eventually all these ideas find their realization in this novel,” Szylowicz said.

The result is a modern and unusual narrative, distinctively set apart from any of the other novels written at the time.

“Early readers were divided,” said Szylowicz. “There were those who suspected there was something different and interesting in the book, and those who thought, ‘Oh my god, this is endless. I don’t know how many pages we have to read about this guy who can’t seem to fall asleep.'”

Yet even 100 years after the first volume was published, the overlapping themes of grief, jealousy, love and homosexuality in Remembrance of Things Past continue to resonate with modern readers. Spanning over 4000 pages, Proust’s work connects with readers who want to get lost in a book.

“It’s such a large novel, it’s a universe in itself,” said Szylowicz.

The Rare Book and Manuscript Library is open Monday through Friday from 8:30 a.m. to 5 p.m. and will feature the “Marcel Proust: Writing Without Words” exhibit through the end of August.