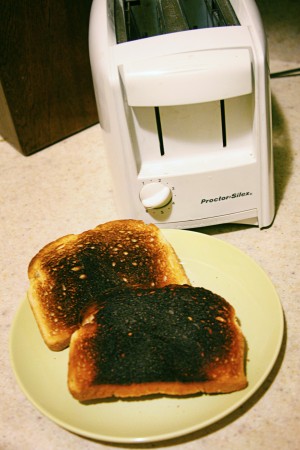 This past summer, I lived on my own for the very first time. This is, what most twenty something’s would consider, a milestone. Without the convenience of a dining hall or my mother’s home cooking, I had to learn some of the ins and outs of independent living the hard way. This summer allowed me much time for self-exploration and in that time I discovered something pretty important: I’m not a chef. Unfortunately for me, but fortunately for you, I learned a thing or two about… wait for it- burns! I’m not going to say I burnt everything, but it’s probably fair to say that about ninety percent of what I tried to cook yielded responses like, “it’s just a little overdone,” or, “this is crispy!” or, my personal favorite, “it’s kind of … tough.” While I cannot make you a chef, I can share with you a few simple burn remedies and tricks that will not only make your life a little easier, but your plate a little fuller and your stomach a little happier.

The basics of burnt food can be broken down into the five “S’s”: Scraping, Scooping, Scrapping, Soaking and Scrubbing.

Scraping is a useful technique for the “this is the last piece” chef, and the “there’s no way I’m making another batch,” chef. This trick works especially well with toaster items and slightly burnt baked goods, which encompass anything from french-fries to toast. I like to take a sharper knife and gently scrape the surface of the food to remove some of the charring. Hold it over a paper towel on a clean counter top to avoid dropping and ruining the food. After you’ve scraped the crisp parts off though, try tasting it to see what you’re left with. Never throw out what you’ve made before trying it because there’s always a chance that you’re still left with something not only salvageable… but entirely edible!

Scooping works well for the improvisational chef. A lot of times when it comes to pies or cakes, the center won’t be as burnt as the edges. If this is the case for you, and the edges aren’t salvageable but the center is, try scooping out the portions that are still good. Forget about appearances! My father, the man from whom I get my cooking genes (or lack thereof) always told me, “it doesn’t matter how it looks. It only matter how it tastes.”

For instance, if a pie or tart burn, scoop out the parts that are still good and put a dollop of whipped cream or even ice cream on top, garnish with some fresh fruit and just like that, you’ve created the crumble that you intended on making in the first place.

Scrapping, while it sounds the least appealing might be the most effective. If you burn pastas, or rice in particular, there is a very simple remedy: a loaf of bread. Remove the rice or noodle from the heat and transfer to a cooler or room temperature dish. Then, take slices or scraps of bread and cover the surface of the burnt goods and leave bread there for ten to fifteen minutes. This will allow enough time for the bread to draw out the burned taste and aroma from the rice or pasta. Rice and pastas can burn quickly if you’re inattentive and it’s always nice to know a quick fix.

Soaking is great for the “I eat meat” chef and the “I don’t eat meat” chef alike! If you’ve burned meat—whether it is on the grill or in the oven—simply scrape and remove the outer skin and proceed to soak the meat in a dressing or gravy of sorts. Marinade it to soften the meat up and either skewer it and reheat or serve as is. The possibilities are really endless. When it comes to vegetables, soaking them in a lowly concentrated mixture of water and vinegar will remove the bitter taste. Be sure not to add too much vinegar, as your veggies will end up tasting more acidic and chances are you’ll end up having to throw them out as a result.

The final S is for scrubbing. No, to answer your question, I am not advising you to scrub down your burnt food. This is for all of you cooking on an electric stovetop. The temperature is difficult to control, a woe every owner of this appliance is intimately familiar with. This lack of regulation makes for a lot of guessing and room for error when it comes to heating up meals. The amount of times I had sauces or soups or just even plain water bubble over and onto the stove this summer were countless! Often times, I’d be so exhausted after cooking that I’d want to relax and wouldn’t be in any rush to clean up- giving the burnt liquids time to solidify into a frustratingly durable crust. I tried store bought sprays, paper towels and A LOT of elbow grease and nothing seemed to rid the surface of the stains. Finally, I used two kitchen classics: vinegar and baking soda. It made me nostalgic of my fifth grade science fair project all while creating enough of a chemical reaction to remove the stain. Sprinkle baking soda on the burn marks, spray with vinegar and let that sit for a little. Scrub with the abrasive side of a sponge and some hot water and the stain will come right off!