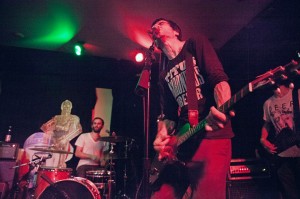 It was a Sunday night’s Sunday night. All of campus was exhausted from partying hard all weekend and was working hard on their put-off homework. Everyone except those who came out to the small, bar-side room at Canopy Club to catch Titus Andronicus.

There was only one opening band, Lost Boy ? from New York. I had absolutely no expectations for these guys, having never heard of them, but I ended up really enjoying their set. Even though the crowd was still a little sleepy and they had some trouble riling them up, they had a few shining moments. I found their music was at its best when they let their poppy guitar work come to the forefront. They’re doing similar things to those guys in Parquet Courts.

When it was time for Titus Andronicus’ set, the area in front of the stage was healthily packed. Lead singer and guitarist Patrick Stickles made a comment about the last time they played in Urbana, in 2008, on the very same stage. No graduating to the big stage just yet.

They played a healthy mix of old stuff and stuff from Local Business, their album from 2012 that, upon listening to in preparation for this show, I have decided I really enjoy. Good stuff, but the highlight of their set for me was the epic new song they played. Titus Andronicus fans fear not. Great things are in store.

Check out more photos from the show at @readbuzz on Instagram!