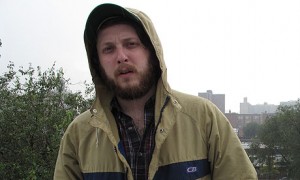 Walking into Opera North’s Howard Assembly Room was like slipping into a parallel void. Gone was the red velvet elegance of the main staircase, and present was a deafening wall-of-sound reverberating across near pitch-black walls. With no standing room, show attendees sat in a theater-style arrangement fronted by an elevated stage and a blue light-tinted mixing set-up. There were no phones, no cameras, only silence as I took a seat in the second row.

The London-based Helm (Luke Younger) boasted a short but focused set meshing ominous darkwave and post-apocalyptic dissonance. Without any noticeable transitions, his set played like a singular composition of mysterious depth that carried out soundscapes for as long as possible just to see what world they’d end up exploring. Most of these doomish sounds seemed to emulate some of Nine Inch Nails’ more vulnerable instrumentals alongside The Soft Moon’s cryptic echoes. As eyes glazed over and zoned, Helm’s final composition was a waterfall of refreshing noise marred by what seemed like tribal shouts. An open electronic landscape of fading out synth accompanied his nonchalant exit stage left.

The visual extension of the set coincided with the aural cacophony. As Bennett began contorting his own body like a v-neck-wearing shaman, stock footage of tribes and other bits of African mystique strobed behind his set-up. Tracks such as “Black Mamba” and “No Spare No Soul” continuously fueled the set’s primal intensity, but hardly yielded variation. While breaks in the chain of aggression were few and far between, unsettling images of color-inverted faces added to the uneasiness throughout the onslaught of colorful beats.

Oneohtrix Point Never (Daniel Lopatin) casually strolled across the stage in the wake of Cut Hands’ finale. Taking a seat in one of the wall-intended spaces in the venue’s left-wing, Lopatin relaxed with his phone out and sipped on his drink. It was the sort of placidness expected from an electronic experimentalist centered on intimate polyphonics rather than scathing beats.

OPN’s set took a few moments longer to ignite, but once projections of sterile, 80s-inspired computer graphics sloppily roamed about on the backing screen, the Brooklyn electronic artist was in full momentum. Performing new compositions from his R Plus Seven record, OPN played “Problem Areas” early on, combining the track’s ascending stairwell of polyphonic tones with geometrical abstractions on the projector. Only minutes in, the amount of variation within the set was beyond commendable. Every soundscape delivered on its own uniqueness – some appropriately lighthearted and mystifying, and some nihilistically shallow and alarming. Moments of post-song darkness and silence allowed the crowd to soak in the rhythms no matter how surreal.

The spectacle almost came to resemble a performance art exhibit. More aggressive pieces of samples pummeled cracks in reality’s pavement with harrowing sound walls and displays of offbeat designs whose source codes seemed out of whack. Softer tracks, such as “Still Life,” brought the set to an oddly down-to-earth level with a concluding slideshow of modern art pieces amidst children’s choir sampling and warm synths.

While it’s never been easy to describe OPN’s signature synths and pre-generated noises – namely on “Chrome Country” where pretty piano strokes lock with spacey droning and distorted choirs – the accompanying projections looked nothing short of a computer animation student’s final project gone horribly awry in the most eclectically gorgeous manner. In a similar fashion, the same can define Lopatin’s music, crafting a beautifully complex Frankenstein monster of electronic sounds when translated live.