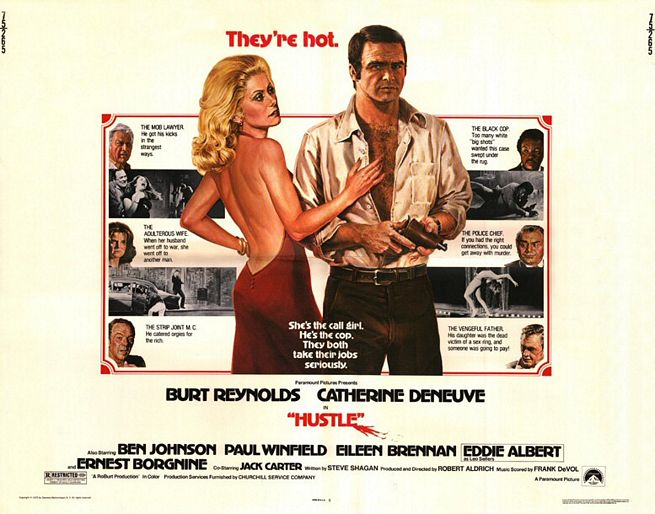 Used with permission by Paramount Pictures.

No one would likely ever claim, or accuse, actor Burt Reynolds of being a great actor. Despite an incredible breakout performance in John Boorman’s Deliverance in 1972 and his amusing role in P.T. Anderson’s 1997 Boogie Nights, Burt has been, at best, an entertaining star. But as a screen personality and star, no one in the 1970s was ever more popular in the peak of his career. In director Robert Aldrich’s 1975 crime/film noir hidden gem Hustle, Reynolds delivered one of his finest performances as a darkly cynical cop Lt. Phil Gaines. For Reynolds and Aldrich this film was also their successful reunion, of sorts. Aldrich, who had made several landmark noir films in the 1950s, like Kiss Me Deadly and The Big Knife, a year previously worked with Reynolds on the popular jail house/football film The Longest Yard.

Reynolds’ performance is serious, far richer and sensitive than his usual comedic simple fare. As Gaines he’s a self proclaimed “student of the 1930s” and all its values.  He longs to settle down eventually with Nicole, escape the madness of his job and fly off to Rome.  She claims she loves him because he’s the only man she has compassion for in bed.  She praises him for his principled code commenting, “you’re obsessed with being right”.

Reynolds would later go on to basically “phone in” clichéd tough “good old boy” parts in numerous popular crime films, as well as the famous Smokey and the Bandit and Cannonball Run series; but few remember how his overlooked performance in Hustle stands out as an exception in his long career.