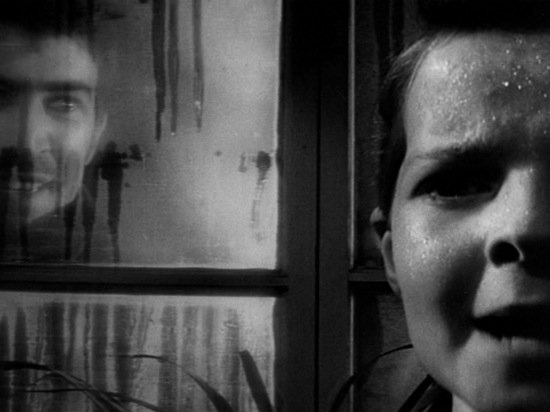 Another reason why Stephen King believes we “crave” horror movies is that the horror narrative returns us to the simplicity of our childhood, where things were black and white, where all the grays are eliminated. Sometimes this can be applied literally to visually expressive black and white horror films, like director Jack Clayton’s 1961 gem The Innocents, which was shot by famed cinematographer Freddie Francis.

This rather conventional ghost story is one of the most successful adaptations of Henry James’ 1898 novella The Turn of the Screw. William Archibald and Truman Capote co-wrote the screenplay for The Innocents and with Francis’s visual elements achieve incredibly creepy effects, such as superimposed actions and slow dissolves that eerily blend images of frightened faces and unexplained dark, oddly framed objects.

Screen legend Deborah Kerr stars as governess Miss Giddens, a woman who is hired by a wealthy gentleman, (Michael Redgrave), to care for his young orphaned niece and nephew, Flora (Pamela Franklin) and Miles (Martin Stephens) at his run down country estate. And even though she’s only a new employee, the absentee guardian gives her total control of his charges. Kerr’s performance is so chillingly vulnerable, and her wide eyed reactions are so effective, while partially reminiscent of her governess role in The King and I, her performance excels like an intensely riveting live stage performance.

Clayton develops this ghostly tale with a slow and steady narrative pace suggesting that the spirits of a dead gardener/groundskeeper named Peter Quint and past governess, Miss Jessel inhabit the house and are attempting to possess the lives of young Flora and Miles. When the estates’ house maid, Miss Grose, fills in other background detail and backstory, Giddens replies with a worried realization, “something secretive, whispering and indecent” has happened here.

Clayton further utilizes conventional horror effects with fine degrees of success: night time storm and wind blowing open windows with long white curtains, odd noises echoing through long dark hallways, eerie whispering voices, creaking doors, strange bird sounds and candles that extinguish at the most frightening moments. Other equally spooky effects include the cold face of Quint approaching a dark window pane, a mysterious woman dressed in black who suddenly appears by an estate pond, and other strange figures that appear and vanish on the tower of the estate’s rooftop.

Kerr’s Miss Giddens is a role among her finest performances in the distinguished career of this six-time Oscar nominee, further proving beyond a doubt that A-list actors can deliver in fine adaptations of horror films. Jack Clayton’s The Innocents is a memorable, ghostly emotional experience.