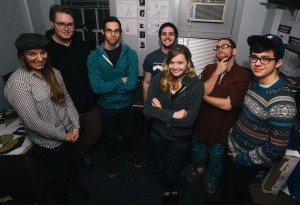 Some of the folks who made Pizza.fm possible. Photo by Zach Dalzell.

Until this year, the University did not have a free-form, non-commercial, student-run college radio station. The CU area has a vibrant local music scene, but a core aspect of college life was missing until a group of students put together Pizza FM, an online radio station run completely by students that streams on http://pizzafm.org.

Founder Adam Barnett, a University graduate and former buzz music editor, wanted to establish a college radio station similar to the one at Drexel University, where he attended school during his freshman year. Barnett said the University was reluctant to help get Pizza FM started.

“Nobody really wanted to help us out … either because they felt that a college station wasn’t necessary because we already had WPGU and WEFT or because they felt like people had tried to start up this kind of thing in the past and eventually gave up,” Barnett said.

In the meantime, Barnett and co-founder Tyler Cochrane established a music blog so that Pizza FM had some presence.

“There were only a handful of steady members, since nobody really wanted to be a part of something that didn’t exist yet,” Barnett said. “But as we picked up and I reached out to some people in the music community whom I knew from internships and being the buzz music editor, we were able to host a couple benefit shows that started giving us some funds.”

Pizza FM registered to be a registered student organization during the summer of 2011, which also provided more funds. In May 2012, Barnett started speaking with Laura Haber and Tony Reimer at Unit One in Allen Hall about getting a permanent space to house the station. They were able to negotiate and figure out a perfect location. Barnett said that, without cooperation from Haber and Reimer, Pizza FM wouldn’t have a home. After establishing a location, the Pizza FM crew held more fundraisers and started buying and receiving donated equipment.

Once organized, the station put out an open call for people who wanted to be disc jockeys. Barnett trained the DJs, music directors and program directors.

“I got my first C+ in my life because I neglected finals to make this happen, and it did, so I’m super excited that the station is doing really well,” Barnett said.

Since its official launch on September 22, Pizza FM has run successfully, broadcasting a variety of different shows featuring all kinds of music — whatever the DJs want to play. The hard work and dedication that went into establishing Pizza FM has paid off as more and more listeners tune in online.

Some of the shows Pizza FM has to offer:

“Back where I’m originally from in Springfield, I used to contribute a lot to a venue called Black Sheep Cafe. They did a radio show every week that played a ton of local music, and it was the only show I had listened to where the music was actually, well, good,” said Cannamela. “With Pizza FM, I saw the opportunity to contribute to something similar while I’m at school.”

On All Things Electronic, Cozzens plays a wide array of different types of electronic music. He said: “I play … anything from dubstep, trap, Moombahton and house, to ambient, chill out, downtempo and always that funk and soul. I wanted to get involved with Pizza FM because I’ve always loved sharing music with people. Throughout the year, I’d always make my friends CDs and give them flash drives of all the new music that I’m constantly finding. Pizza FM gives me a fun and interactive way to do that, and I just love being involved with the music scene in general.”

Notable artists features: Into It. Over It., Good Luck, Run Forever

Live and DIY (a pun on “live and die”) focuses on artists that are associated with the do-it-yourself music community, with a special emphasis on the more melodic side of the punk scene. DIY refers to artists who self-release their material, and the members of this community emphasize putting listeners and musicians on the same level. Baker said: “I’ve always had a passion for music, and a radio show is the perfect outlet for the kind of person who’s always excited about new music that isn’t always in the spotlight.”

When to hear it: Tuesday mornings from midnight-2 a.m.

In addition to ska and punk, Brazil does special segments in the show, such as “Urban Dictionary Entry of the Week,” “Song Cross-Dressing” (he plays a song and then plays the same song covered in a different genre) and “Band Families” (two or more bands, which have at least one musician in common, play in a row). Brazil wanted to join Pizza FM because he is passionate about disc jockeying. Brazil said: “I think being a DJ is awesome, so that’s what drew me in on Quad Day.”