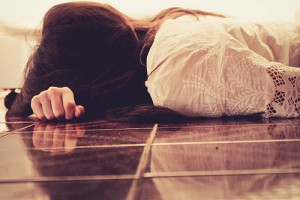 Photo used with permission from Creative Commons and Guilherme Yagui

Hello again readers. Here’s a random tidbit of information about myself: Chris Brown is hands down my least favorite person. He is arrogant, egotistic, and your prototypical jackass.  And, oh yeah, there was that one time he brutally beat up a woman. However, there is one person that I dislike more than Chris Brown and that is the guy who cheated on my sister. Yeah, I dislike him MORE than Chris Brown; that’s how intense the disgust is. My older sister had been with him for over a year. She was, of course, madly in love and certain that he was “the one.” That fantasy came crumbling down when she found a used condom in his wastebasket —one that she was certain was not used on her. My older sister is my role model, my idol, the one person I can always count on to be strong in situations where I’m a mess. But this experience tore her to pieces; it hurt my heart to see the devastation that her ex-boyfriend caused. Seeing cheating bring down the strongest person I knew was my first brush with the traumatic effects of cheating. The hatred I felt towards her ex-boyfriend for taking down such a beautiful and kindhearted person was beyond words.

I have cheated on a significant other before. Yes, I know what you’re thinking. How could I rehash a sob story about my sister and then drop that bomb? I’d have to be the biggest hypocrite in the history of cheating. Hear me out readers. While most writing on infidelity focuses on the victim, I believe that in order to fully understand cheating, you must also get into the mind of a cheater. And I suppose that cheater will be me. I make no excuses for what I did; it was wrong in every sense of the word. I will merely explain the situation. It was freshman year, prior to my sister’s own personal heartbreak. I was as young and dumb as a freshman can get and had recently started dating a guy I met my first week of college. He was cute, he was nice, and he treated me really well. Do you get my drift here? I was a lonely and scared freshman who thought that maybe a boyfriend would make Champaign feel like home. So I dated a guy who wasn’t for me, who I knew I could never love. And then I cheated. I cheated because I felt like I wasn’t getting anything out of the relationship, so I had to look elsewhere.

Please readers, do not judge me or think of me less. The guilt and regret I have towards the situation is something that I still feel today. I eventually ended the relationship, although I know now that I should’ve the moment that I felt a desire for any man besides the one I was dating. Since my own experience with cheating and being by my sister’s side during her experience, I have vowed never to cheat again. I realized that being in a relationship in which you cheat is simply a waste of your time and theirs. Find someone who satisfies you in every way, who you’re so in love with that you can’t imagine yourself with anyone besides them.  Other people’s feelings are at stake here. If you find yourself with a desire for another person, be mature enough to end the relationship before you do anything that could hurt that person even further. I have since been in a faithful relationship, a relationship in which it was the easiest thing in the world to be faithful. And that’s how I knew it was real.

I have never underwent what it feels like to be cheated on, though my heart goes out to anyone who has experienced this themselves. If you do find yourself a victim of cheating, do not let it take away your vitality or excitement towards love. I can confidently say that since my sister’s encounter, she is even stronger and wiser than before—just like the role model she has always been to me. Anyone that cheats on you for any reason is a waste or your time, but you will find someone who values you above everyone else.  Just stay away from anyone who bears any similarities to Chris Brown.