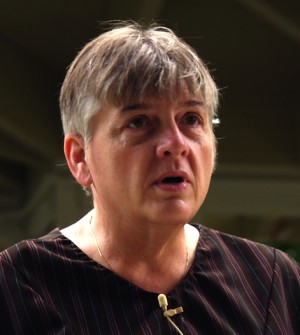 In celebration of the holiday season, resident storyteller Kim Sheahan of the Spurlock Museum in Urbana, IL will offer a family storytelling concert of multicultural folktales highlighting giving and generosity.

The event will feature tales chosen by Sheahan originating from around the globe, a conscious decision made “to reflect our mission as a world cultures museum,” Sheahan said. Despite the event’s location on the calendar, not every story will be specifically holiday themed.

“Only one I have picked so far is holiday related,” she said. “The theme is giving, so I have, for example, a story about a generous kangaroo and a wombat from Australia, one about three princes and special treasures from the Jewish tradition, and two Buddhist legends about very kind and brave parrots. I may have to tell both of those!” The emphasis placed on the act of giving itself is sure to be a welcome change of pace during the stress and hubbub of the holiday season.

Sheahan, who often shares her craft with the local community through programs hosted by Spurlock and through her work with other members of the C-U Storytelling Guild, has had an illustrious career as a storyteller, performing at national events such as the National Storytelling Conference, the Northlands Storytelling Conference and the Illinois Young Artists Conference. She has also used her talent to create and perform one-woman historical shows, which educate the audience on experiences of individuals like Civil War nurses, as well as more modern civil rights activists. While her craft has taken her across the U.S., Sheahan’s passion for storytelling was discovered while working with a group of middle school students in Champaign-Urbana.

“I discovered the power of story when I told a group of bored, end-of-the-school-year sixth graders the story of the Trojan War in front of one of our large Greek sculptures,” Sheahan said. “The students went from bored to floored, their mouths open as the connection of story and artifact brought the history to life. That’s when I knew being a storyteller was going to make me a more effective educator and open new doors for meeting and entertaining people of all ages and interests.”

Sheahan has been educating audiences through the power of story for some time now and employs a few simple steps to captivate an audience.

“First, you have to be truly interested in the story you are telling,” she said. “If it doesn’t grab you, why should it grab the listeners? Next, you have to be in tune with your audience members because they are your partners in this journey called story. Their reactions (or non-reactions) tell you if they have become lost along the trail, want to linger somewhere a little longer or can’t wait to see what happens next. You have to be able to react to any of these situations. Lastly, it always helps to engage as many senses as possible. How did the gingerbread house taste? How does the stone soup smell as it is cooking? How soft is Rapunzel’s hair?”