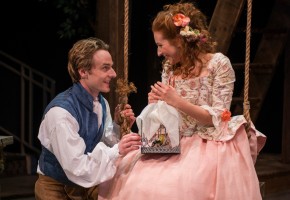 “Tom Jones, The History of a Foundling,” has been a classic tale of the “accomplished blackguard” as Lord Byron called him. Henry Fielding’s 1749 novel chronicles a life less ordinary of a lovable rascal whose adventures chronicle a survival based on portable charm rather than character and courage. It was an Oscar winning film in 1963 that playwright John Osborne adapted to the screen. Now, legendary stage director Jon Jory has brought “Tom Jones” to the stage of Skokie’s Northlight Theatre. If the depth of this picaresque adventure cannot be preserved in a just over two hours, at least the rich characters and farcical elements are very much alive.

Adapting a book of 364,747 words with settings over much of England to a stage and the strictures of traditional theatrical time limits is no easy task. Jeffrey D. Kmiec’s one-size-fits-all set is as clever as it is versatile, and its use for numerous indoor and outdoor locations blends beautifully with the narrative. Jory’s fast-paced script uses narration from multiple actors who also play multiple characters. Only Sam Ashdown (Tom Jones) and John Lister (Squire Weston) play only one character. This moves the play along nicely, but don’t drop your attention as the narrative is presented in rapid-fire fashion. 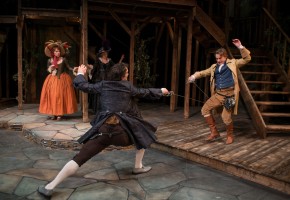 Jory’s script captures the sex farce elements of Fielding’s story, but in such a condensation, it barely gets into the social satire Fielding so brilliantly espoused. Yet, satire on the sexual mores of the 18th century and the remnant of Puritan values in English society, might ring a bit hollow to a 21st century audience, and Jory’s more universal observations on behavior and society just might make more sense even if they diminish what Fielding said.

Director William Brown, one of the Chicago area’s best, keeps the cast up to the pace of the script and pulls some really fine performances from his cast. Mr. Ashdown is a charming and credible Tom Jones, but it is the women who steal the show. Nora Fiffer, Molly Glynn, Melanie Keller, and Christine Panfilio, all master multiple roles with charm and an undeniable sexual energy.

Jon Jory’s “Tom Jones” may not be great Fielding, but he has adapted Fielding’s great work into great entertainment and a remarkable stage vehicle that runs just over two hours. Rarely has the essence of a great, but lengthy work, been so skillfully distilled for a modern audience.