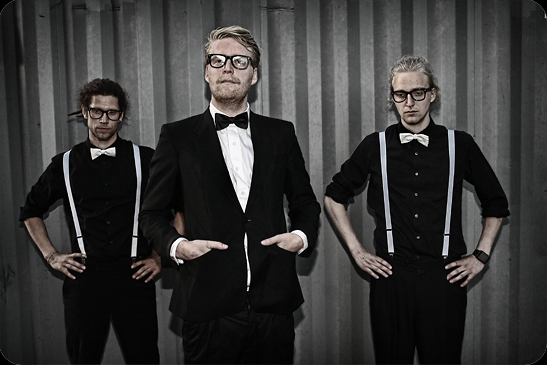 Used with permission by Movits!

Swedish swing-hip hop band Movits! will make a stop at Reggie’s tonight in Chicago. The group made a splash into the mainstream in 2009 after receiving acknowledgment from Stephen Colbert and then releasing their debut album Äppelknyckarjazz on Comedy Central Records; however, Movits! is anything but a joke. Buzz talked with saxophonist Joakim Nilsson before the band’s Chicago show to discuss the band’s experience with Colbert and the fear of being confused for a comedy act.

buzz: With your energetic sound, how well do you feel that translates during live performances?

Joakim Nilsson: I feel that the energy is what translates best in our music. It’s hard to translate the lyrics live without being what we in Sweden call “långranding.”

buzz: How does the song-writing process start for you guys?

JN: Usually, Anders (Rensfeldt) has an idea for a beat. We then work around that, finding chords and melodies. Vocals and horns are added last in the process.

buzz: Swing isn’t as big in the mainstream as it once was, are you in any way aiming to breathe new life into the genre by implementing hip hop along with it?

JN: Swing was something we were drawn to because of the energy it had. We were never really hardcore swing fans. We wanted to implement the energy of the swing music into hip hop is some way.

buzz: Stephen Colbert gave you guys a little push a few years ago, how did that come about?

JN: Well, his production team emailed us and asked if we had a US tour coming up and if so, would we like to play on his show. We had never played outside of Sweden at this point, so a US tour wasn’t really on our schedule. But we said that, “Hey, if you want to, we can drop by the show anyways.”

buzz: Having been involved with Stephen Colbert, are there ever any nerves about having your music mistaken for a joke? If so, is it ever a distracting misconception to deal with?

JN: We were actually on the verge of releasing our second album on Comedy Central Records, but decided against it because we didn’t want to be confused for a comedy act. I guess it could be mistaken for that when you don’t understand our lyrics. But as long as you come to the show and have a good time, it’s all good!

buzz: Also, with being brothers and having a band, is it a lot easier to make music as opposed to making music with people you’re less familiar with?

JN: Johan (Rensfeldt) and Anders (Rensfeldt), the brothers, have a very good communication when in comes to being creative. They have been doing it for such a long time. For me, stepping into that world 10 years ago, I was afraid it would be hard to make my voice heard, but we have a very good balance in the band. Everyone is good at different things and everyone is good at listening to each other. That’s extremely important when you’re spending as much time together as we are.

buzz: Any future releases in the works?

JN: Nothing in the near future, we are out supporting our new album right now. But we have started drawing the outlines for new stuff already, so it won’t be too long.