Jack LaSota is a graduate student in Electrical and Computer Engineering. As someone who spends a lot of time troubleshooting computers, it is not all that surprising that he has a great interest in troubleshooting the human brain. For this ambition, he obtains guidance from Less Wrong, a blog devoted to “refining the art of human rationality”. In this interview, Jack will be telling us more about this interesting online community, and also about their meetings held in Chambana.

First off, what is Less Wrong all about? What are its goals, and how does it go about trying to achieve them?

Less Wrong is a community aimed at becoming more rational. By this we do not mean being like Spock or Ayn Rand. We mean nothing more than being better at figuring out what’s true, and achieving our goals. There’s a website, LessWrong.com, with good writing on the art of arriving at correct conclusions for bald apes whose brains have a long list of known bugs (cognitive biases). We also have in-person meet up groups, which are mostly about discussing this kind of stuff for fun.

Can you give us a little history about how the site got started? Who were the founding members? How has it evolved over the years? 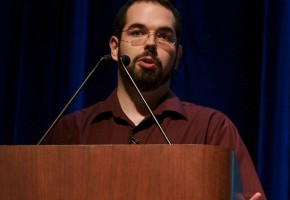 Less Wrong was founded in 2009 by the Machine Intelligence Research Institute, formerly the Singularity Institute for Artificial Intelligence, who thought their cause required especially rational people to follow their arguments. The co-founder, Eliezer Yudkowsky, was into cooperation in prisoners’ dilemmas and realized that lots of causes would benefit from having a resource of rationality material to link to and a community of rationalists to appeal to, and if each of them put a little resources into this common good instead of focusing exclusively on their own cause, they would all come out better. So he wrote a bunch of insightful essays about rationality, which attracted insightful discussion, and insightful people started writing more. Over the years, Less Wrong has grown in size, accumulated more writing, fixed some philosophical mistakes and spawned meet up groups to discuss it and do fun things.

Someone linked me to it, I read essays, and they were really good. Each one linked to several others. A TV Tropes-style tab explosion occurred. An internship brought me near the DC meet up group, and I attended one of the meet ups. It was much more fun than I thought a rationality club could be, so I kept going.

What is the general structure of a local meet up? Besides talking about Less Wrong articles, are there any other activities that you like to do together?

Once a week, someone posts a topic, along with a time and location on the mailing list and Less Wrong website. We discuss the topic, which is usually something related to Less Wrong material, discuss other things and play games such as Pandemic, Zendo, Fluxx and Liar’s Dice, until we get bored and go home.

Can you give me an example of valuable lesson that you have learned through participation in this community? 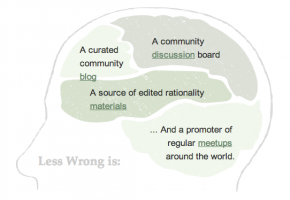 “If you want to make the world a better place, there are much better returns to be had from being more strategic than there are from being more altruistic”. For example, if you are an engineer, and have the choice between working overtime and volunteering to do unskilled labor, you can get more good done by working overtime and then paying the salaries of several workers whose hourly wages are much less than yours. Out of the Less Wrong community, 28.6% are part of the Effective Altruism movement, which is about things like using economics and carefully weighing evidence to determine the best charity to donate to. Charities seem to vary in effectiveness per dollar over at least a couple of orders of magnitude, making charity selection much more important than how much you donate.

This is an area where I think Less Wrong-style rationality really shines, because when you aren’t personally feeling the effectiveness of your actions, it’s easy to forget to use numbers, and to succumb to the cognitive bias of scope insensitivity. Less Wrong has a bunch of arguments for counter-intuitive but useful guidelines for making the world a better place. For example, some people think you should donate to multiple charities instead of just one. But if the amount you could donate to the best charity is much less than the amount the charity is currently using, your additional dollars probably won’t push the charity much further into diminishing returns, so every marginal dollar is worth roughly the same. So if it’s the best place for your first charity-dollar, it’s probably the best place for your last charity-dollar too.

May your charities be ever the more effective, and your thoughts ever the less wrong!

If you’re interested in learning more about Less Wrong additional information can be found on their website: lesswrong.com.