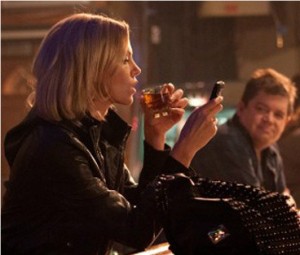 The plot of Young Adult is centered on young-adult novel ghostwriter Mavis Gary (Charlize Theron), who comes crashing back to her hometown of Mercury, Minnesota, leaving a trail of destruction wherever she goes. Determined to rekindle a romance with high school boyfriend Buddy Slade (Patrick Wilson) after hearing of the arrival of his newborn daughter, Mavis works not just at constructing her latest and last novel for the failing young adult series, but herself as well to seduce Buddy away from his happy marriage. Standing by the sidelines, Matt Freehauf (Patton Oswalt), a man she went to high school with, attempts to dissuade Mavis in her quest.

Clearly on the verge of mental and alcoholic collapse throughout the film, Mavis attempts to manipulate the world around her and craft a final story for her book. Young Adult works in revealing a number of different modes of construction. While Mavis’s destructive and narcissistic actions are fascinating to watch, it is, as Roger Ebert put in his review of the film, Matt Freehauf  that is the “character we can identify with, and Oswalt’s Matt is human, realistic, sardonic and self-deprecating. He speaks truth to Mavis.”

A victim of an attack by his peers in high school, Matt walks with a cane. While Mavis spends much of her time in the film shaping her image (for example, wearing fake hair, getting her nails done, using loads of makeup, waxing and wearing tight clothes), Matt’s style is to be himself, wearing clothes he seems comfortable in. Mavis, obsessing on her youthful high school years and romance with Buddy, creates self-aggrandizing and narcissistic characters in her novel. Matt, too, creates characters, but his is a more positive creation of narrative. He takes action figures and builds new versions of them, combining different parts from different figures.

The creation of those mixed figures was a main topic of discussion at the post-film panel. Oswalt discussed how originally Matt only painted the action figures, but after finding a website created by a man who mixes and matches figurine parts to create mashup action figures, he brought the idea to screenwriter Diablo Cody, who agreed that it was a much more relevant hobby for Matt to have.

Matt, like Mavis, is a creator, but he is one in a positive way. Matt creates interesting new figures, while all of Mavis’s characters are merely reflections of herself, without any attempt to grow or become something new. Both characters are recycling used pieces: Mavis uses characters that were created by someone else, as does Matt. None of the characters in Mavis’s novel change by the end. She perpetuates the same story, the same personality, with no true growth within herself or her novel’s protagonist. Matt, on the other hand, does recycle figures created by another person, but he does so in order to create something new. He also, unlike Mavis, is able to authentically create something new from himself with his brewery in his garage. He makes his own alcohol and, true to her character, Mavis takes what others create and continues destroying herself and her relationships, for example by abusing alcohol.

During the panel discussionafter the film’s screening at Ebertfest, Oswalt described Mavis as a “despicable character, but a recognizable one.” By the end of the film, Mavis hasn’t grown or changed, but she and Matt reveal to us – in these recognizable characters – our own lives, our own decisions, our own constructions. Oswalt revealed, when he shared the story of showing Cody the man that creates mix-and-match action figures online, just how so many aspects of the film are about collaboration and creation and about differing types of creation. Not only are Matt and Mavis twinned creators, but Oswalt too helped be a creator in the film and had a central part in crafting his character. The theme of different yet parallel types of creation is found throughout Young Adult and is used effectively to distinguish the foils of Mavis and Matt from each other.