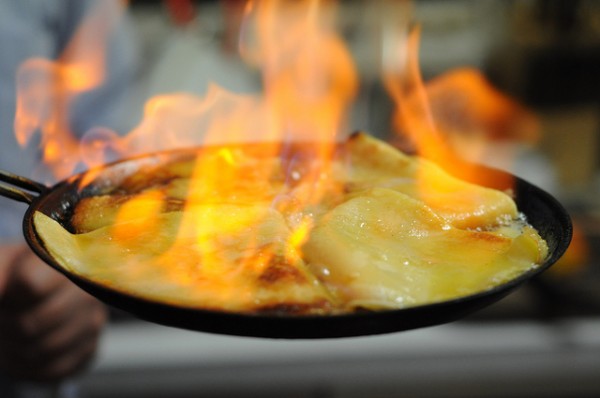 Savory or sweet, for breakfast or lunch, simply filled with jam or handsomely garnished with salmon, crêpes can satisfy any type of craving. Aside from being a social dish, crêpes are easy to make and pretty economical. It’s no wonder why a lot of countries have a similar version of crêpes in their cuisine, varying in appearance, taste and method of preparation: pancakes in America, blinis in Russia, dosa in India.

Originally, the recipe comes from France and consists of a very thin pancake made out of wheat flour (for sweet fillings) or buckwheat flour (for savory fillings). Crêpes are traditionally savored with apple cider, the signature drink of Brittany, the French region where crepes are from. However, among all the possible types of crepes and fillings, one recipe has become popular over the years: la Crêpe Suzette.

Crêpe Suzette is a variety of crêpe served with a sauce of caramelized butter and sugar, called beurre suzette, orange juice and flambéed with Brandy. Lighting the alcohol on the freshly cooked crepe will make it melt with sugar and create a delicious thick and smooth sauce. It is also fun to watch when it is served on a chafing dish at a restaurant.

Regarding its history, its origin and name have been claimed by different sources. The first claim asserts that Crepe Suzette was created out of a mistake made by a young assistant waiter named Henri Charpentier who was working at a well-known and upscale café in Paris, le Monte-Carlo. At a reception given in honor of the Prince of Wales and his guests in 1895, Charpentier was serving the crepes on a chafing dish when the syrup accidently caught on fire. After tasting it, the Prince asked Charpentier to name his dessert and the waiter picked the only lady present among the guests: a beautiful French girl named Suzette.

The contradicting source claims that the name originates from the name of a French actress named Suzanne Reichenberg, who was playing a maid preparing crepes on stage. One night, the crepe maker who provided them to the actors decided to light the thin pancake in order to draw the audience’s attention.

If you want to impress your friends for a brunch or entertain your family on Sundays with Crêpe Suzette, follow this recipe: