One thing that people go back and forth about, is whether or not the internet has helped to improve our social lives. Certainly, it is something which internet-goers in the aggregate seem to find themselves lacking. Anyone who has spent time on the front page of Reddit will know that loneliness is a common motif in the most popular content. The “forever-alone” meme is always an easy find, each time conveying an incident of social awkwardness, rendered in a self-pitiable tone. 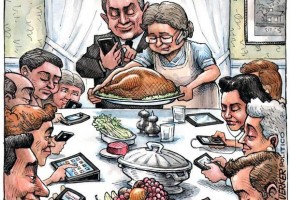 But those are the losers, and losers will always take pleasure in gathering together to vent their grief. The better question is not whether asocial personality types are attracted to the internet, but whether the internet is having an effect on our ability to socialize. Extroverts included.

Many point out that the time we spend online is replacing the time we would normally spend interacting with other people. And by other people, I mean living and breathing physical bodies. Not a username or a 3D avatar. Someone you can hug, someone that can hug you back.

The reason this is all important is because, like anything, our ability to empathize atrophies with lack of use. Lacking contact makes it increasingly difficult for us to connect with other people. And since connection is such a fundamental desire, it is something that we are wrong to ignore.

Granted, there are a wide range of technologies that facilitate communication. Long-distance relationships are far more tenable in the advent of instant messaging and video chatting. Where they fall short, however, is not allowing you to fully experience the other person’s presence. There’s always something lost in the in whichever medium you use. Instant messaging allows for real-time correspondence, but the expressive power of text and emoticons is significantly inferior to all the non-verbal cues that we unconsciously provide in face-to-face conversation. 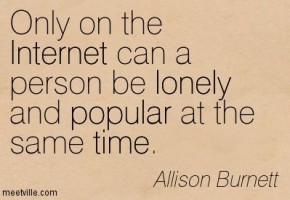 Too true. Image courtesy of meetville.com.

Think about how people reveal their love to one other, and how the words “I love you” probably make up only about ten percent of the message. The red cheeks, the beaming smile and the warm embrace say so much more. Certainly, video chat provides some of this, but even then, it’s the closeness of the other person’s actual body that we really find lacking.

Now comes the point in this article where I talk about some magical new technology that will solve all of these problems.  A technology that will allow for full physical presence, like the fully realized virtual worlds that sci-fi writers have implanted in our visions of the future.

Unfortunately, I have no such solution. I merely have a suggestion: if you need to make connections, don’t settle for proxies.  The internet makes it easier for us to have relationships, but it also makes it easier for us to have proxies of relationships, for us to trade substantive interactions for symbolic gestures such as “liking” or the ever elusive “poke”. The problem is that we think these things matter, that they represent some sort of meaningful connection between the giver and the receiver. The problem is that they do not. The relational value of a button click is rather low, about as low as the polite greetings we give strangers out on the street. 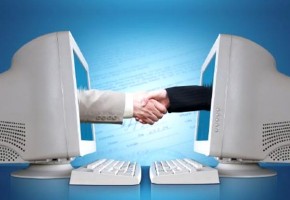 Connections can still be made online, just don’t make it your only outlet. Image courtesy of www.rabblerousetheworld.com.

What isn’t low? Pulling someone out of a crisis. Helping them to realize their dreams. Helping them to create their dreams. The difficult stuff, the stuff that doesn’t get accomplished on our news-feeds, but it’s the stuff that friendships are made of. The more we settle for the easy stuff, the more we deprive ourselves of the true value of relationships, which is the edification of the other’s soul.

Returning to the original point, I don’t think that the internet inhibits socialization. I just think that it has created another outlet for meaningless socialization. Rather than upload yet another picture of a cat, far better to motivate, challenge or inspire. Those are the things that make relationships meaningful. Next to them, having a thousand-odd votes really doesn’t add up to much.