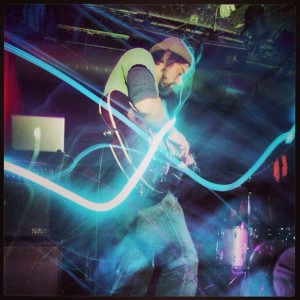 Used with permission by Withershins.

Following the Withershins’ announcement of their new full-length album, Mt. Fuji in Blue, the Champaign-based shoegaze rock band began a Kickstarter campaign to help fund the 12-track album. The album’s ambitious in length, as it will be pressed on double-vinyl, and frontman Isaac Arms is confident that it will be worth it. The donations made to the Kickstarter project are also for a pre-order of the album and, depending on the size of the donation, there may be some pretty hefty reward tiers involved, but is only open for contributions until Friday, June 13. Below, Arms talks with buzz about the Kickstarter campaign, the addition of the band’s new drummer, and the anticipation of Withershins’ third LP, which Arms said is “the best thing that Withershins has done.”

buzz: The album is on double vinyl, how long is it?

Isaac Arms: It’s close to an hour long. We haven’t got the finished master so we don’t have a final time stamp on it, but from the mixes that we’ve gotten from our engineers and producers, it’s close to about an hour long.

buzz: Why is it so long? Did you expect that or is that just how it ended up?

IA: We didn’t really expect it to be that long. I guess the album kind of started whenever Luke Bergkoetter joined the band. That’s been the biggest change in the band for years maybe since we really started getting going. Our drummer Colin [Larson] moved to Indianapolis about two years ago and we made it work with him traveling from a different time zone to come play shows, but he got married and moved away and at some point we just stated getting stretched a little thin. Whenever he said we should maybe look for another drummer, our good friend—and one of our favorite drummers in town—Luke stepped up. Luke was in about four bands at the time (several of us are in several projects), and he had booked about a week worth of recording time at Earth Analog, Matt Talbott’s studio out in Tolono. He was dedicated and motivated. One of those days he wanted to do a trial-by-fire icebreaker sort of situation where he just said, “Let’s do a new Withershins song.” That was about a year ago, last April, when we recorded “A Patient Boy,” which was a single we released on Bandcamp for free, and it went very well. It was very interesting and difficult and unique.

buzz: So, how long have you been working on the album?

IA: That was kind of the starting point. I had a couple of songs written, but the band hadn’t touched it, so the fact that he wanted to start recording and writing and arranging and meshing as a unit meant him really becoming our drummer. Through this process he has truly become such a full-fledged member of the band, so that was the starting point for the album because from there we just started practicing more and writing together at rehearsals.

buzz: On the Kickstarter page it says you’ve “truly achieved the sound we had been dreaming up.” What makes this album different that you were able to achieve that?

IA: A good friend of mine and the band’s came up to us after we played Wicked Walls’s record release show and he said, “I can’t quite explain it and I don’t even know if I understand it, but now that you guys have got a punk drummer you sound more shoegaze than ever.” And while these things are somewhat arbitrary, I think there are real things that he is speaking to. Colin was an amazing drummer, but something about Luke … I mean, he just hits so damn hard. His style is kind of bare and also brutal in a sense, but it’s beautiful. I’d say the way that Luke drums—his unique style of drumming—and his understanding of the sort of genres we’re tangential to: post-rock, shoe gaze, noise, rock and roll, etc. The drummer really sets the tone and the mood and portrays how what you’re saying is expressed and the guitar and the keys sometimes are what you’re saying, so having a bigger sound from the drums and having a fuller sound from being a five-piece with Colin being able to layer in these things that were studio overdubs in the past and now that’s just a part of the song so the songs are fuller.

buzz: Silver Cities was maybe the best rock album in CU of 2012. How do you think Mt. Fuji in Blue will compare to that?

IA: I don’t know; I don’t know how it will be received. I know how I feel about it. We all are pretty up-front and confident without shame or even any sort of fronting that this is the best thing that Withershins has done. It’s personally the most interesting and consummate expression I’ve been able to accomplish in my 19 years of music. If we release this and somebody else who writes music that’s more accessible releases something close by, it could go totally unnoticed. I think we’re happy with it and that’s really what matters. What we’re finding out now is that some people actually do care because the Kickstarter seems to be going okay so that’s terribly encouraging.

buzz: Reading about the reward tiers, it seems like a lot of stuff.

IA: It is. We’re giving away more than we should and charging less than we should, but I think it’s because we’re okay with being bad businessmen because that’s not our fucking job. We’re really just musicians doing everything we can to make this happen. I think Kickstarter is fun because it lets people engage with a band or whatever, but I’ve generally been against it over the years since it started. I just thought if it means that much to you, save up for it and pay for it yourself. I think there are pretty selfish ways to do it, but we are trying to be as transparent as possible, we are trying to be as humble as possible, we’re trying to be real about it and we’re trying to be generous. If people are going to give their hard earned dollars, then we’re going to share with them everything that we are as a band on the level of every single piece of merchandise and recordings.

buzz: Ideally, when will you be releasing the album?

IA: Ideally, we will be releasing it this August.

buzz: Along with the double vinyl, will it be released on CDs and digitally?

IA: Actually, that’s kind of our deal. We probably would have just waited and saved up our next couple months-worth of paychecks if we wanted to do CDs, but the thing is, it’s partially a statement that CDs aren’t as relevant anymore, at least in the circles we run in. They still exist and of course they’re relevant if you like the CD player in your car. I don’t know, it just feels right. We tracked this album pretty much live to tape with minimal overdubs, so the natural progression is to take an analog recording and produce it over an analog medium. That’s why we’re really just doing vinyl and digital and it’s a double album because you just can fit that much music on a single LP.

The Kickstarter for Withershins’ new album can be found here.