In trying to make sense of the way people use the internet, it is helpful to determine the real-world corollaries of the services that it provides. Certain services can be more easily mapped than others. Email is electronic mail, Wikipedia is a digital encyclopedia and discussion forums can be seen as the virtual equivalent of coffee-shops, public places where people gather to have conversations on subjects ranging from sports and the weather, to parenting and personal finance. 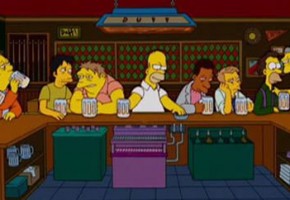 Other corollaries are not so obvious. Where, for example, do we find Facebook in the real world? Is it the high-school reunion, where everyone meanders around a gymnasium, picking up on bits and pieces of each other’s lives, attempting to assemble a narrative of all the time spent apart? Obviously, there exists no exact analogy for the modern social network. Facebook is something set apart from the real world, an altogether unique product of cyberspace, something which we must learn how to utilize and scrutinize according the unique opportunities that it affords.

One of these opportunities is the creation of what urban sociologist Ray Oldenburg calls a,”third place”, and these places are more familiar than we might suspect. According to Oldenburg, a third place is of tertiary importance to any type of community, preceded by the place where we live and the place where we work. Discarding institutions such as the grocery store or the bank, third places are places where people gather for informal conversation. In Oldenburg’s book The Great Good Place, he writesthat “Third places exist on neutral ground and serve to level their guests to a condition of social equality. Within these places, conversation is the primary activity and the major vehicle for the display and appreciation of human personality and individuality.” 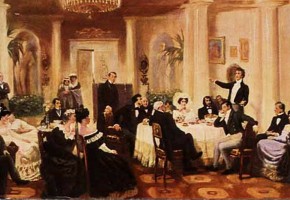 Painting of a French Enlightenment Salon. Image courtesy of wikipedia.org.

Cafés, ice cream parlors, beauty shops, bars and town squares are all examples of third places in the real world. And this is by no means a new thing. In the 16th and 17th century, the salon served as a dedicated time and place where people would gather in the long tradition of Roman poet Horace’s formulation of poetry’s responsibility, “to please or to educate”.

The 21st century has proven needful of its own version of the salon. Traditional third places have broken down in the wake of technological advancements. Automobiles allow for commuting, increasing the distance between the space we work and the space we live. In turn, the suburbs have emerged as communities with minimal inward focus. Fast-food has replaced the family diners and hole-in-the-wall cafes where people used to gather for food and fellowship and, like shopping malls, have turned consumption a zombie ritual. 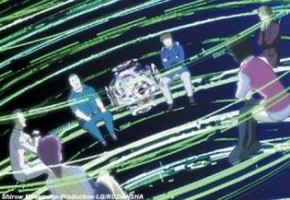 Ghost in the Shell, an anime virtual chatroom. Image courtesy of thescrib.com.

So what now? The internet has evolved to fill in the gaps created by these changes to our society. If the local coffee shop has turned into nothing more than a Wi-Fi hotspot, the online discussion forum is now available as a space where you can publish thoughts, or simply listen on the thoughts of others. Much as a casual bar goer might do before becoming a regular, we are able to listen in or “lurk” on the conversations being had, and jump in as we see fit.

All this points to the fact that perhaps cyberspace isn’t as unfamiliar as they may initially appear. Perhaps websites like Facebook and Twitter are manifestations of social institutions that are as old as the barber shop and public library. And if this is the case, perhaps the third spaces that have withered in the real world may have a brighter future in our virtual world, and we should look to cyberspace not only as medium for new social opportunities, but for the resurrection of those that have been lost.