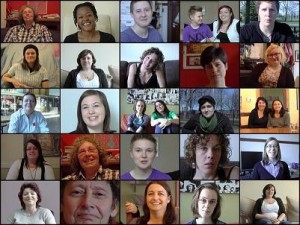 Very few documentary films manage to be as direct and tightly focused as I’m A Lesbian, Montreal. The very title excellently sums up the focus of the film, and the introduction only further develops it, featuring 22 women introducing themselves to the camera and telling the audience their names, ages, and that they are lesbian. The entire, mostly French-language, film, shown at the Art Theater in Champaign during the United Pride Center’s Reel it UP film festival, is composed of footage from interviews that director Tina Fichter had with 22 women in Montreal who self-identified as lesbians, gay women or queer lesbians.

There is very little in the way of gimmicks or visual flair to distract the viewer, either in the film’s editing, camerawork, or performances. Other directors might have chosen to show scenes of the characters outside the interview setting for background, cut to scenes of locations that were described by characters, or display images of other people when their names were mentioned, but Fichter’s camera stays locked solidly on the faces of these 22 women as they tell viewers their stories. The effect of this tightness of direction is that the entire film focuses on the interviewees’ answers to Fichter’s questions, and as such, the audiences’ attention is directed entirely on the stories of the women interviewed.

These women have taken many different paths throughout life to get to where they are, some knowing all along that they were lesbian while others went in and out of marriages or journeyed from considering themselves solidly heterosexual to possibly bisexual before eventually discovering more about themselves and their sexualities. Occasionally, the dialogue will be broken up with successive shots of the women interviewed smiling at the camera, conveying the feeling that this is at its core not simply an intellectual study about their stories but rather a narrative about the emotions and experiences of these 22 women.

The women featured in I’m A Lesbian, Montreal come from a wide variety of perspectives on their sexuality and on their relationship to wider movements such as the LGBTQ (Lesbian, Gay, Bisexual, Transgender and Queer) and feminist movements. One of the interviewees, Diane, was a radical lesbian feminist in the 1970’s, while others attempt to remain apolitical. Some of the couples have more open relationships than others; young couple Vanessa and Stephanie, for example, don’t hesitate to embrace each other in public while a few older couples prefer to stay more reserved. One interviewee, Marin, felt judged by other lesbians for continuing to wear makeup and dresses and pursuing other behaviors that coded as traditionally feminine, while another, Catherine, gradually attempted to change her appearance to exist independently of traditional gender norms.

The result of this immense diversity of opinion and identity within the women interviewed in the film was that the immense diversity within the lesbian community in Montreal was much easier to see. Catherine discussed how her experience coming out of the closet helped her friends put a face on homosexuality, a label most of them had only experienced as a genre at the video store next to the porn section. Through discussions of sexuality like hers, it can be seen that one of the goals of the film was to break down the labels and connotations that exist surrounding lesbianism and to help viewers understand that within the lesbian community exists an incredible variety of people, each with their own perspectives on their sexuality, none of them necessarily presented as more dominant or more correct than another.

It’s refreshing to see the subject of sexuality dealt with in such a frank, no-nonsense fashion in a documentary. There is no narration introducing the subject or characters in the way that a wildlife documentary might describe strange animals in a distant wilderness and no special guidance or overly pedantic implications given to viewers that would influence them in determining which viewpoints are necessarily correct when the opinions of the women featured differ. Rather, viewers are presented simply with the facts of the women’s stories, their outlooks on their sexualities and lives, and their direct admissions of “I’m a lesbian, Montreal.”