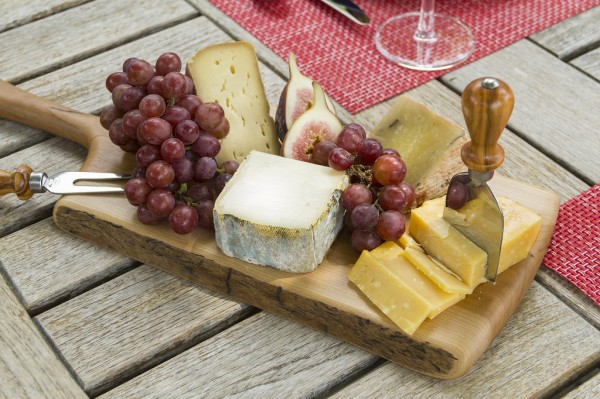 Wooden cheese board with spread. Photo by flickr user Didriks

Recently, the Food and Drug Administration issued a decree banning the long-established practice of aging cheese using wooden boards. However, the announcement of this ban sparked outrage in the artisan cheese community, and the response from both the producers and consumers caused the FDA to back down shortly after issuing the decree. In response, the FDA claimed that the decree they had issued was not an official policy statement and was instead intended to answer questions asked by New York State. However, in the past the FDA has expressed concerns about the safety of wooden boards. In their statement, they also pointed out that “current regulations state that utensils and other surfaces that contact food must be ‘adequately cleanable’ and properly maintained.” Monica Metz, the chief official responsible for food safety issues involving cheese, stated: “Wooden shelves or boards cannot be adequately cleaned and sanitized. The porous structure of wood enables it to absorb and retain bacteria, therefore bacteria generally colonize not only on the surface but also inside the layers of wood. The shelves or boards used for aging make direct contact with finished products; hence they could be a potential source of pathogenic microorganisms in the finished products.”

When I hear these statements, two questions immediately come to my mind: What do producers who use these methods have to say in response and, if this age-old process is such a threat to health, how come I have yet to see a news story about a widespread illness caused from artisan cheeses? To answer my first question, if the FDA decides to make this decree official, not only will American cheese makers suffer, but the importation of artisan cheeses from other countries will stop as well. Corporate companies like Kraft and Sargento will not be affected because they manufacture cheese rather than make cheese using a century’s old technique. One expert, Gordon Edgar, stated: “Wood creates a beneficial environment for cheese. After all, what is cheese but a great achievement of the microbe community?” noting that wood is essential for the flavor of these cheeses. In response to my second question, I found that several scientific articles examined procedures for cleaning and maintaining wood boards during the aging of cheese and found that these boards do not present the danger of bacterial contamination as long as they are cleaned properly. They also pointed out that wood boards create a beneficial environment for cheese ripening and rind formation.

If wooden boards are so dangerous, why did the FDA retract their statement so quickly? My theory is that they were truly considering enforcing this ban, but the reaction from producers and consumers caused them to back down. People have been eating cheese aged on wooden boards for centuries now without getting sick. Maybe the FDA realizes that there is potential for bacterial contamination and wants to stop the risk before it becomes something serious. Will the FDA try to enforce this ban sometime in the near future? Who knows? All I know is that in my book, Kraft Singles don’t count as cheese, and the world will be a sad, sad place without wood-aged cheese.