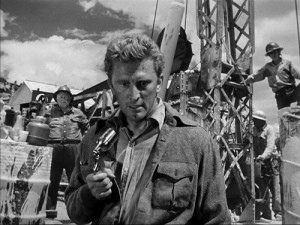 Kirk Douglas in Ace in the Hole. Used with permission from Paramount Pictures.

There is a scene early in Clint Eastwood’s Jersey Boys when The Four Seasons’ songwriter Bob Gaudio gets a sudden inspiration for the song “Big Girls Don’t Cry.”  He’s watching an old Kirk Douglas and Jan Sterling film on television, when Douglas slaps Sterling and she breaks into tears. That remarkable film was director Billy Wilder’s underrated and incredibly cynical 1951 film Ace in the Hole.

Wilder, whose much-praised earlier films Double Indemnity, The Lost Weekend and Sunset Boulevard all had a dark edge, but none went as dark with social satire as Ace in the Hole. Douglas plays Chuck Tatum, a frustrated former big-city newspaper man who exploits the circumstances of a New Mexico cave collapse and insights media frenzy. In fact, upon its release, the film’s title was The Big Carnival.

Based loosely on a 1925 incident with a man named W. Floyd Collins, the film’s tale, written by Wilder, Lesser Samuels and Walter Newman, begins as Tatum begs his way into a reporter job on the small Albuquerque Sun-Bulletin, bragging up his big-time credentials. After a year on the job covering natural disasters and local interest stories, he becomes stagnated and frustrated while waiting desperately for a huge story, which he’ll handle his own way, “A Tatum Special.”

One day when covering a rural “rattle snake hunt,” Tatum and his side kick, a fresh out of journalism school reporter named Herbie Cook (Robert Arthur), learn of a Indian cliff dwelling cave collapse and a local guy named Leo Minosa who is trapped 200 to 300 feet below. While a local contactor figures he could rescue the man in 12 or so hours using traditional methods, shoring walls with lumber, Tatum milks the story for all its human interest and persuades a local sheriff, who is up for re-election, to take a slower, safer approach and drill a hole from the top of the cave to rescue Leo. Leo’s wife, Lorraine (Sterling), a bored platinum blonde, is about to leave town and abandon her husband when she gets sucked into Tatum’s scheme and charms. So begins the media circus; Tatum has his story and unlimited new opportunities as the small town is overwhelmed by tourists, radio and newspapermen and people fundraising for Leo’s relief.

Shot in a noir-like black and white, Charles Lang Jr.’s photography perfectly captures the greed and corrupt values of Tatum and the local sheriff. Douglas is simply outstanding as Tatum. And when things take a turn for the worse, even Tatum’s little bit of a guilty conscience doesn’t change much of the film’s tone. There is no Frank Capra ending to this one.

Ace in the Hole was a commercial and critical disappointment in its initial release, dubbed by some as Wilder’s first outright flop. In addition, the Hays Office, which monitored censorable film content, took offense to the depiction of the corrupt police. According to Wilder in Cameron Crowe’s 1999 interview book Conversations with Wilder, things went wrong upon its release. The head of Paramount changed the title before its opening. Reflecting further on the film, Wilder said: “It was a complete failure. I had changed my mind about the audience … but they never gave it a chance. They wanted be entertained, entertained in a serious way, but not too serious a way.”

Nevertheless, Ace in the Hole has survived and thrived; director Spike Lee has even proposed a modern remake of the film. For those who seek out this hidden gem, you will be simply be amazed by the film.