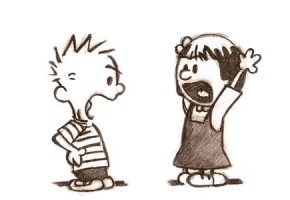 The point of nonverbal communication is that the more information that we can send at each other, the more likely the message will get through. If our words are ambiguous, then our faces will bring clarity. If our words and our faces are ambiguous, our brains still have the opportunity to synthesis understanding from all the other signals that we send to each other. Oftentimes, words aren’t even necessary. Poems could be written with a single touch, short stories with a prolonged hugs, novels with five minutes of silent fun between the sheets.

In telecommunications, such a communication infrastructure would be considered “broadband,” meaning that it covers a wide range of frequencies. The migration of human-to-human communication onto computer-mediated platforms has resulted in a dramatic loss of frequencies. Text messages communicate significantly less information than phone calls, and upvotes, lesser still. Referring again to telecommunications jargon, a signal that travels across a single channel is called baseband. And although it would be extreme to call either text or upvotes a baseband form of communication, the comparison is apt when we consider how much is lost with the absence of physical presence. There’s a reason that some writers spend fewer words on what characters say than they do on how they go about saying it—nonverbal communication says a lot.

The point in identifying this change we should be putting more effort into figuring out how to compensate. A motif of this column is that the benefits of virtual communities far outweigh the costs, but not that the costs should be ignored. Rather, we should be thinking about strengthening the signals that we send to each other, so as to pack as much information as possible into the communication infrastructures that have become part and parcel of our everyday lives. 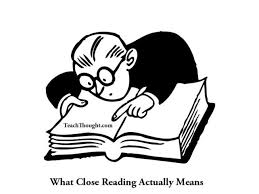 What English teachers won’t tell you. Image courtesy of teachthought.com.

To offer but one piece of advice, I refer to another technical term, albeit this coming from literary criticism. It is difficult to get through any course in the modern English curriculum without the professor bringing up the concept of “close reading,” an interpretative technique with origins in the New Criticism movement of the early 20th
century. In brief, “close reading” is the practice of carefully studying a text so as to extract as much meaning as possible from diction and syntax. As the name suggests, you examine the text with a fine-tooth comb, looking for anything and everything that could be implied by the words on the page.

Of course, “close reading” is not without its faults, the main being that it can lead the intellectually careless into making too much of noise, or seeing things that aren’t really there. But as a tool for extracting a lot out of a little, it can serve as a redress from all the misunderstandings that slow down our computer-mediated lives. Paying more attention to what we say and to what we read is crucial for reclaiming all of the information that gets lost in our transition to an online world. Broadband is god, baseline is bad. And who knows: there might be a whole spectrum of signaling frequencies on our horizon, enough to make face-to-face meetings in coffee shops seem primitive. But until we reach that point, the goal should be to make the most out of what we’ve got, and a commitment to “close reading” is a sure step in the right direction.