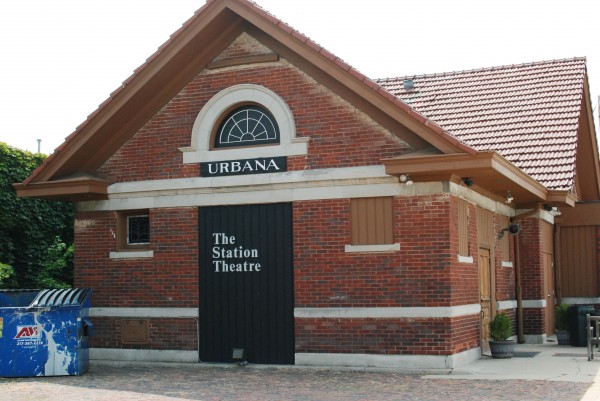 Urbana’s Station Theatre is scheduled to end its summer season with Amy Herzog’s “4000 Miles,” a simple yet poignant production about a cross country bike expedition, the bond between an isolated grandmother and her similarly lonesome grandson and the small, “rich” moments that give life depth. buzz had a chance to speak with director Sara Boland-Taylor before the production’s opening night on July 31.

»buzz: Could you tell me a bit about yourself and how you got involved with the Station Theatre?

»Sara Boland-Taylor: I came to Champaign for my Master’s in 2010 and stayed here for the PhD program. All of my practical experience outside of scholarship and research has been at Krannert or in the Armory Free Theatre, which is a Department of Theatre space. I’ve been wanting to get involved with the Station for a long time. Everything I’ve seen there had a really high production quality. And it is a community theatre; there aren’t professional actors there (though there are actors who have worked professionally) but it’s not by definition a “professional theatre…” For something that is technically community theatre, the production quality and the standards set by the company are incredibly high. I wanted to get involved in some way and, I was speaking with one of the professors here in the Theatre Department, and he mentioned that they were looking for directors for the summer, and I thought “What a useful distraction from my dissertation!” I was playing around with scripts, and I really wanted to find something that was contemporary. I mainly do 17th Century English theatre, and I wanted to find something that was really contemporary to sort of get my head out of that space for a little while. I also wanted to find something that was written by a woman; supporting the work of female playwrights is something that’s really important to me as an individual. So it was just a matter of submitting an application and “4000 Miles” was a piece that I remembered loving. It just sort of worked out and everyone at the Theatre has been really supportive throughout the process.

»SBT: They don’t have storage and the budget is not huge, so a lot of bringing it all together is about borrowing things and making connections with people in the community, so in that way it really is a community theatre. You really have to reach out to the other resources available throughout town and I feel that they do a really good job of putting things together in such a way that it doesn’t look like a “community theatre” production.

»SBT: Sure! I first encountered the play in 2013 when it was playing at the Duke on 42nd Street in Times Square, and I immediately fell in love with the play because it’s very simple. There’s a 21-year-old kid who rides his bike across the country with his best friend and along the way sustains this really horrible tragedy, but he keeps riding. He rides all the way from Seattle to Greenwich Village in New York and arrives at his 91-year-old Marxist grandmother’s apartment at three in the morning. And it’s a play about their relationship; you’ve got these two people who are kind of outsiders. Leo is isolated and lonely – desperately lonely – and Vera is 91 years old, she lives alone, she’s been widowed for 10 years. The only person she speaks to on a daily basis is her neighbor across the hall, and they only speak on the phone. So it’s just sort of about these two people living in isolation and how they come together, and how Leo heals as a result of becoming friends with his grandmother… I also think it’s a really perfect piece for the end of summer, as we’re approaching school again. It’s this 90-100 minute play with no intermission. You go in and you see the entire arc, and you go home and maybe have a conversation about it or maybe have a drink afterwards… I remember the first time I saw this play, I was alone and when I came out of the theatre, I was so refreshed. It’s sort of like a palate cleanser, especially after seeing so many big budget Broadway shows over the summer.

»buzz: You mentioned the budget, but what have been some of the challenges you’ve faced in bringing “4000 Miles” to the Station?

»SBT: I don’t want to make it seem like the Station is poor; that’s not the case at all! It’s just that nobody is handing you $5,000 or $10,000 and saying, “Put on this play!” So that’s one challenge—we try to stay in the budget or below the budget because I want to help foster the growth of the Station, so it’s about finding creative solutions to the props. Another challenge is the varying skill levels of the actors I’m working with on this show. We’ve got Janice Rothbaum, who’s playing Vera the grandmother. Janice actually turns 90 on the day the show closes, and she’s phenomenal. She’s led a very full life, she’s a Station veteran and has been acting there for 25 (to) 30 years. There’s Casey Thiel, who’s playing Leo. He’s acted as a hobby for many, many years but he has no formal acting training, so it’s about finding a vocabulary that works for each actor. We’ve also got Sally Hamer who’s playing Bec, and she’s a part of the Studio Acting Program here at Krannert. She’s got a lot of training, and I have to make sure I’m not overworking her because I can say very little to her and she knows where to go. And then we’ve got Wen Bu who’s playing Amanda and her work is largely in choral performance, dance and musical theatre, so this is a totally different style for her. So it’s just about finding a way to put these four actors in the same play while working at their skill levels and experience levels. It’s a great challenge for me,and helps me to improve as an educator and director. So I would say, the biggest but most exciting challenges I’ve faced are finding creative solutions to problems rather than throwing money at them and discovering how to manage the relationships in the play and sort of shape the actor’s performances in such a way that their comfortable with their performance as well.

»buzz: A few recent productions at the Station Theatre have featured pretty small casts. Is this one small as well?

»buzz: What has that experience been like? Is it easier than working with a larger cast or more of a challenge?

»SBT: Logistically, having to navigate four schedules is much easier than having to work with 10 or 15. But it also helps to give me a lot of time to get to know each one of these individuals as an actor. I can spend more time developing a vocabulary with them through the rehearsal process. What I really like about this play and small plays in general is that it’s really intimate. The audience gets face time with each of the actors and every actor gets the opportunity to try something new. I enjoy the small, intimate environment that small plays have to offer… For most of this play, there’s only two people on stage at once. This allows them to really spread out, really use the space and take their time.

»SBT: I really think the Station is a good place to see a play because every time you walk through the door, you experience a community and become part of it. There are always Station board members there, there are always Station actors… It’s not about walking in, watching the play, and leaving; you can walk in, put your things done, get a cookie and a coffee, bring those in to the theatre, talk to your neighbor and it’s such a “homey” atmosphere. You don’t feel isolated as a patron; you feel welcome. I think this play is particularly suited to this space because it’s just a one unit set—the piece itself is already really intimate, and when you’re sitting five feet away from the actors, that level of intimacy skyrockets. You want to get close, you want to see all the moments and you are able to. The play is so intimate and there are so many rich moments—and they are indeed just moments, they’re fleeting and they go—and you can be so close to the action that you don’t miss them. You miss those almost cinematic moments in a big theatre, but here you can really see the actors working through certain moments, actions, emotions and problems.

»buzz: What are some of the major takeaways from the play? What do you want the audience to leave with?

»SBT: Something that I really love about this play is that it’s about a moment. It’s about a very small moment in time in the lives of these two people that changes them, and you don’t realize you’re part of one of these moments until it’s gone. You don’t realize that you’ve had that really intimate experience with another person that has changed you fundamentally as a human until it’s over, and this play is about one of those moments… It’s just a matter of appreciating those moments. I don’t want to say there’s a lesson to take away from the play and if there is, it’s different for everyone, but for me it would be about appreciating those moments. And about really saying “Oh. I don’t know when I’m going to have another opportunity to sit down and have a cup of coffee with my grandmother and hear her babble on about her neighbor who’s driving her crazy.” Those moments are really rich and it’s just a matter of appreciating them, of taking the time to sip the coffee and enjoy that moment. … What I’d really love to happen is for the audience to walk away at the end of the night saying, “That was a really nice story.” Because that’s what it is—I mean, there’s also the part where it’s a mediation on death and mortality—but it’s a really, really nice story.

Catch “4000 Miles” at The Station Theatre through August 9.