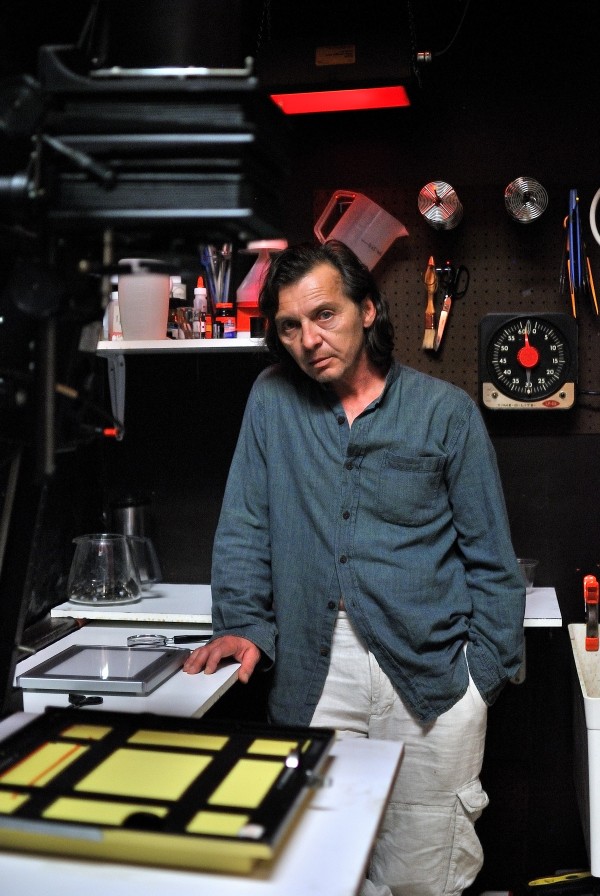 Lyosha Svinarski in the darkroom of the Urbana Museum of Photography. Photo by Alyssa Abay

In a world of digital ease, it’s becoming rare to see someone invest the time to take photos the classic way. But one local artist still believes that traditional film photography is capable of making great art and wants to share his passion with the community. To celebrate the 175th anniversary of photography, Lyosha Svinarski, a local artist and director of the Urbana Museum of Photography, is hosting “Drawing with Light,” an exhibit meant to not only showcase his own work but also showcase the timeless beauty of film photography.

The museum, located in downtown Urbana, will be showing a collection of Svinarski’s black and white photographs through September 27. The photos displayed include composed still lifes and landscapes of places around Urbana. The work was done in silver gelatin prints, and prints of his work are also available for purchase at the museum.

All prints were made using the darkroom technique, a process that could be split into three parts: Taking the photo, processing the negative and making the print. It’s the third part that suddenly requires the artist to take on another role and pick up a different set of tools for the sake of his craft.

“When you go into the dark room to work with your negatives and your print, that’s when you all of a sudden became the chemist,” Svinarski said. “Every step has its own ‘formula’, which needs to be acknowledged before being changed according to personal aesthetic.”

Svinarski’s personal aesthetic comes from his history as a self-taught painter. A fascination with the way colors changed under the light became the base for his work in black and white photography, helping shape the resulting monochromatic photographs.

“All the grays, whites and blacks resulted from the changing of colors under the light,” Svinarski said. “So I would say that, paradoxically, colors are my influences as well as the art of painting in general.”

In terms of photography, Svinarski also took influence from Pictorialism, a photo movement in the early 1900s that was also rooted in painting.

“The subject of photography was a little blurry, more intimate, more romantic, ideal, done with intimacy and a very good sense of humanity,” Svinarski said.

Using this pictorial aesthetic, Svinarski created a series of photos that rely on specific elements, elements that unify art as a whole. Of these elements, he paid close attention to composition as a way to introduce elements to one another and find that special balance between them.

“Composition is queen of all,” Svinarski said. “It creates rhythm, the atmosphere and harmony in all photographs.” 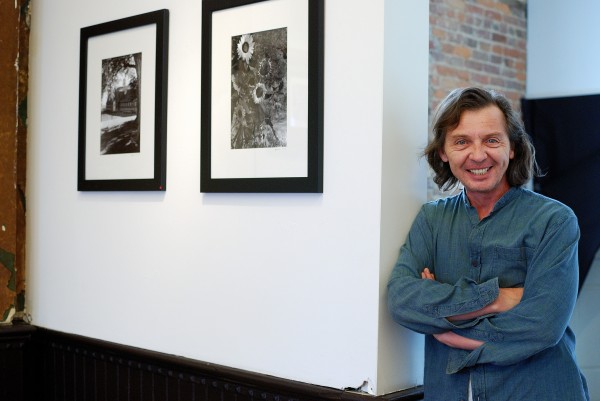 Lyosha Svinarski with some of his works in Drawing with Light at the Urbana Museum of Photography. Photo by Alyssa Abay

In the 175-year history of photography, paintings and photographs have been in a close relationship right from the start. Things were tenuous at first, as photography offered a cheaper, less cumbersome alternative to the family portrait. But when photography began to take off as an art form, it started to take root in painting, both in terms of color and in representation of the subject.

In our modern day, a transition of the same scale is visible in the wake of digital photography. There are now smaller gadgets on the market that can take hundreds of quick snapshots, which can then be shared at any time with other people. And for those who take pictures professionally, there are programs that can do much the same as a dark room right on your computer.

But just like painting, the art of film photography hasn’t died in the wake of progress. In fact, as Svinarski pointed out, digital and analog photography are beginning to mix.

“Today, we can already see the crossover,” Svinarski said. “People have begun using digital files in the analog darkroom and printing on photographic paper instead of inkjet.”

There’s also, as Svinarski noted, a younger generation that’s taking the same interest in analog photography, especially black and white photography. Groups such as VAMP, a student run organization at the University that specializes in analog photography, are keeping in touch with the museum, along with students at Parkland College. Svinarski is also hosting photo classes for kids ages seven to 14 and plans to launch more classes for both youths and adults to teach film photography to older ages.

Svinarski doesn’t see the desire to learn analog as an aversion to digital. In fact, he sees it as a straight shot to it.

“I think analog photography is the best way to understand digital photography,” Svinarski said. “It all comes to the knowledge of the light and the way that light will work with the sensors.”

In other words, be it digital or analog, it’s all drawing with light.

“Drawing with Light” will be on display at the Urbana Museum of Photography until September 27. More information can be found on their Facebook page or by phone at 649-5605.